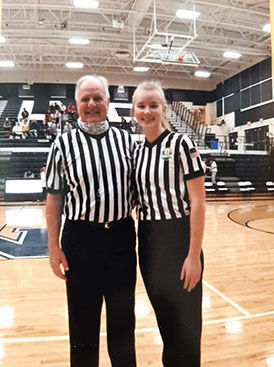 Duane Ressler of Napoleon, refereed a middle school basketball game with his granddaughter, Caely Ressler (at right), this past winter. 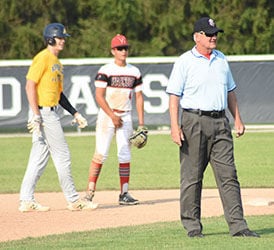 Duane Ressler of Napoleon, refereed a middle school basketball game with his granddaughter, Caely Ressler (at right), this past winter.

Napoleon’s Duane Ressler started umpiring high school baseball games in 1992, and even after retiring as a teacher in 2003 he is still calling balls and strikes.

Ressler, who turned 73 on July 3, has officiated the Ohio High School State Baseball Tournament five times, most recently in 2014 — nine years after retirement from his full-time job.

“It’s activity,” said Ressler about why he still umpires baseball games. “It gets the legs moving and the heart pumping.

“I still get calls to do games,” added Ressler, who umpired six high school tournament games this past spring despite cutting back his schedule. “They still thunk enough of me to call six (tournament) games. I will try again next year. As long as my legs hold out, I still want to do it.”

There are not many older umpires remaining and the shortage of officials in all sports is becoming more of a problem at the high school level.

“I hear from other officials they are giving it up,” said Ressler. “There is too much blow back from fans and coaches. People expect you to be perfect in your first game and then get better.

“We, as older officials, have to encourage the younger ones,” added Ressler. “We have to be a mentor, encouraging and being positive. We have some good ones now, but the job is different and there aren’t as many guys that want to get off work and do a second job.”

Ressler, a teacher for Napoleon Area Schools for 33 years, was Napoleon High School’s athletics director from 1991-99 and is an officer for Henry County Retired Teachers.

Along with umpiring baseball games, Ressler was a high school basketball official, beginning in 1979. While he stopped officiating basketball games in 2013, Ressler, who officiated games with his son, Jeff, came out of retirement to call one more game this past winter with his granddaughter, Caely Ressler.

“That was great,” said Ressler. “There was such an age difference — she is 18 and I am a little older than that. I was glad to be able to offer some constructive criticism.”

An avid golfer, Ressler also works part time at the Napoleon Municipal Golf Course with his wife, Diane. The couple have been married 49 years.

“She got me in before the city made the rule you can’t have a spouse in the same department,” Ressler said. “Now I do a regular shift and help organize and am the administrator of the men’s league (at the golf course). I keep busy with that.”

Despite splitting time between Napoleon and Florida, Ressler is also active in the Napoleon Lions Club. He has been the club’s ice cream chairman for the past 13 years, making sure ice cream is sold every year at the Henry County Fair.

Even with everything he has going on, Ressler said his most important activity is being a grandfather. He has five grandchildren and enjoys watching all of them playing sports.

Caely, the eldest grandchild, was a member of the Napoleon Lady Cats basketball team that won the Division II state title in March.

“That was something,” said Ressler. “But, I also have two that play soccer, another in basketball and in the spring there is track and field. I like to go watch all of them.”