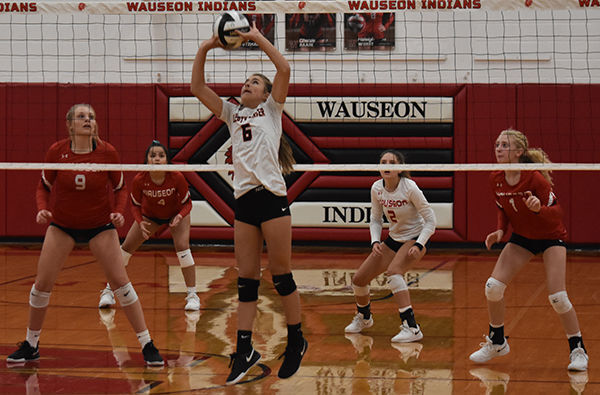 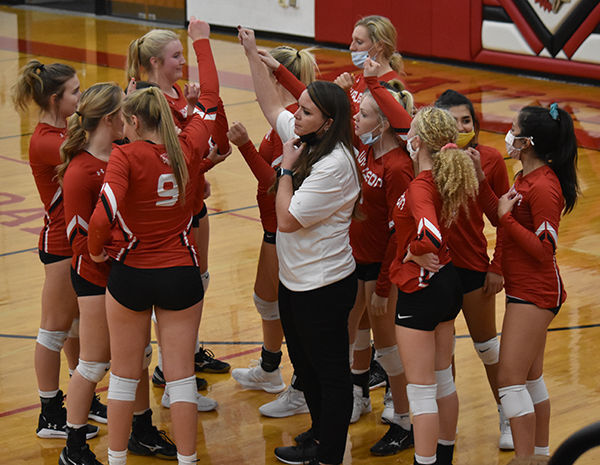 Wauseon’s Kelsey Wulf, center, leads her team’s break out of a timeout during Friday’s Northwest Ohio Athletic League volleyball match against Liberty Center, in which she earned her 200th career victory.

Wauseon’s Kelsey Wulf, center, leads her team’s break out of a timeout during Friday’s Northwest Ohio Athletic League volleyball match against Liberty Center, in which she earned her 200th career victory.

“It’s a great feeling,” Wulf said. “Obviously, I’d like to thank all the players I had at both past and present schools, Evergreen and Wauseon.

“I couldn’t do this without great athletes always working hard for me and I truly appreciate that.”

Wulf spent 10 years at Evergreen before taking over at Wauseon last season.

Meanwhile, Liberty Center, playing without three players due to quarantine, dropped to 7-13, 1-6.

“We’ve got three players out, including our starting setter (Madison Perry) which is like having your starting quarterback out; it makes it 100 times harder to win,” LC coach Brandi Lingruen said. “Our hitters are hitting sets that they’re not used to. There’s a lack of a level of comfort there.

“With that being said, I thought they still played well.”

Wauseon was playing its second match in two days, beating Patrick Henry in three sets Thursday after exiting quarantine Wednesday due to positive COVID-19 tests in the school Oct. 1.

“We did a really good job of regathering ourselves and picking up where we left off,” Wulf said.

Liberty Center gave Wauseon all it could handle by roaring back from 19-14 down to make the first set interesting.

“(Winning the first set) is huge momentum going in and volleyball is such a huge momentum sport,” Wulf said. “We really needed to pull that out; luckily we edged it out.”

LC kept the first set close with some stellar blocking as Jenna Jones had a pair of blocks and Lucy Jones added another. Both had two kills apiece.

“Lucy and Jenna are, I think, some of the best blockers in the area,” Lingruen said. “They come every single game. That’s what they like doing more than hitting, I think. They just love to block and the feeling you get when you block a ball.”

Though, in the second set, Raabe got hot in her middle position.

Raabe, blocked by Jenna Jones one point prior, unleashed four kills from the middle position in a 7-0 run to help Wauseon go on top 10-5 early on. She had seven kills total in the second set.

“Chelsie and all of our hitters, really, have been doing a good job,” Wulf said. “We’ve been cutting down the errors. Chelsie is a big part of our offense, but so are many of the other girls as well and I’d like to give them credit as well.”

Liberty Center pulled within 16-14, but never came any closer the rest of the way.

In the third set, Wauseon took a stretch of 13 of 14 points, getting three kills and a block by Estep, to lead 18-6 by Lingruen’s second timeout.

The Lady Tigers mounted a small comeback with six straight points to pull within 21-15, but the Lady Indians put the match away with back-to-back kills by Raabe and Estep.

“Our seniors are starting to see the light in that for a lot of them, this is the end of their volleyball careers,” Lingruen said. “It’s leave it all on the floor or leave with regrets.”

Also in Division III, Wauseon, the No. 8 seed, will meet Monday’s winner of No. 3 Tinora and No. 11 Northwood Wednesday at the site of the highest remaining seed.

Current Henry County Treasurer Lisa Spiess will run as a Democratic candidate for the position in the Nov. 3 General Election.

Wachtman has focus on technology, investments

Diana R. Wachtman is running as a Republican challenger to the position of Henry County treasurer on the Nov. 3 General Election ballot.