This view of the Riverview bridge project is seen from the south side of the Maumee River Friday.

The following is an Ohio Department of Transportation update on a project which is constructing a new bridge over the Maumee River near Napoleon. The $10.3 million project began in February and will be completed in June 2022. Vernon Nagel Inc., Napoleon, is the general contractor.

Construction of a new bridge near Napoleon, which will continue Industrial Drive over the Maumee River, began Feb. 13. The new bridge will provide additional access across the river and will supplement the only other bridge in the city on State Route 108.

Currently, crews are finishing the earthwork on the south side of the bridge along State Route 110. A 30-day period, which began June 19, is required to allow the earth to settle before work may resume in that area.

The project also includes construction of two roundabouts, one at each end of the bridge. A roundabout on the southern end of the bridge, on the Rte. 110 side, is under construction and will be completed this year. The area is currently in a 30-day period to allow the soil to settle before work may resume. State Route 110 will close in early September as part of that work.

Construction for a roundabout on the northern end will not begin until next year.

In the coming week, work will continue on pouring pier columns and forming pier caps. More to come on that.

When complete, the new bridge will measure 948 feet, 4 inches long.

JACKSON, Miss. (AP) — Mississippi lawmakers voted Sunday to surrender the Confederate battle emblem from the state flag more than a century after white supremacist legislators adopted the design a generation after the South lost the Civil War.

Spectators in the Capitol cheered and applauded after the votes in the House and Senate.

Each chamber had broad bipartisan support for the historic decision. Republican Gov. Tate Reeves has said he will sign the bill, and the state flag will lose its official status as soon as he does. That could happen in the next few days.

Mississippi has faced mounting pressure to change its flag during the past month amid international protests against racial injustice in the United States.

After the vote, legislators embraced each other. Even those on the opposite side of the issue also hugged as an emotional day of debate drew to a close.

A commission is to design a new flag that cannot include the Confederate symbol and that must have the words “In God We Trust.” Voters will be asked to approve the new design in the Nov. 3 election. If they reject it, the commission will set a different design using the same guidelines, and that would be sent to voters later.

Mississippi has a 38% Black population — and the last state flag that incorporates the emblem that’s widely seen as racist.

Republican House Speaker Philip Gunn, who is white, has pushed for five years to change the flag, saying that the Confederate symbol is offensive. The House passed the bill 91-23 Sunday afternoon. Within hours, the Senate followed suit, 37-14.

“How sweet it is to celebrate this on the Lord’s day,” Gunn said. “Many prayed to Him to bring us to this day. He has answered.”

Debate over changing the flag has arisen before, and in recent years an increasing number of cities and all the state’s public universities have taken it down on their own. But the issue has never garnered enough support in the conservative Republican-dominated Legislature or with recent governors.

That dynamic shifted in a matter of weeks as an extraordinary and diverse coalition of political, business, religious groups and sports leaders pushed to change the flag.

At a Black Lives Matter protest outside the Mississippi Governor’s Mansion in early June, thousands cheered as an organizer said the state needs to divorce itself from all Confederate symbols.

Religious groups — including the large and influential Mississippi Baptist Convention — said erasing the rebel emblem from the state flag is a moral imperative.

Business groups said the banner hinders economic development in one of the poorest states in the nation.

In a sports-crazy culture, the biggest blow might have happened when college sports leagues said Mississippi could lose postseason events if it continued flying the Confederate-themed flag. Nearly four dozen of Mississippi’s university athletic directors and coaches came to the Capitol to lobby for change.

Many people who wanted to keep the emblem on the Mississippi flag said they see it as a symbol of heritage.

Legislators put the Confederate emblem on the upper left corner of Mississippi flag in 1894, as whites were squelching political power that African Americans gained after the Civil War.

The battle emblem is a red field topped by a blue X with 13 white stars. The Ku Klux Klan and other hate groups have waved the rebel flag for decades. Georgia put the battle emblem prominently on its state flag in 1956, during a backlash to the civil rights movement. That state removed the symbol from its banner in 2001.

The Mississippi Supreme Court found in 2000 that when the state updated its laws in 1906, portions dealing with the flag were not included. That meant the banner lacked official status. The Democratic governor in 2000, Ronnie Musgrove, appointed a commission to decide the flag’s future. It held hearings across the state that grew ugly as people shouted at each other about the flag.

After that, legislators opted not to set a flag design themselves. They put the issue on a 2001 statewide ballot, and people voted to keep the flag. An alternate proposal would have replaced the Confederate corner with a blue field topped by a cluster of white stars representing Mississippi as the 20th state.

Democratic state Sen. Derrick Simmons of Greenville, who is African American, said the state deserves a flag that will make all people proud.

“Today is a history-making day in the state of Mississippi,” Simmons told colleagues. “Let’s vote today for the Mississippi of tomorrow.”

An invasive, and dangerous, species of plant seen in southern Ohio just a few years ago has made its way to northwest Ohio.

Poison-hemlock was seen growing in southern Ohio in 2017, but recently it has been seen in parts of Henry County.

“I think it’s been around for awhile in the area, but with the mild winter we had it just explode in the southern part of the county, and now we’re seeing it some in the northern part,” said Bob George of Henry Soil and Water Conservation District.

He added large groupings of the plant have been seen in Holgate and Hamler.

According to the Ohio State University College of Food, Agricultural and Environmental Sciences, every part of the plant contains toxic substances that can lead to respiratory failure in humans and animals.

While it typically can be found growing along ditches and railroad tracks, George said a special concern right now is poison-hemlock is sometimes being found in agricultural fields.

“It’s very deadly to livestock,” George said. “For instance, if it’s in a wheat field and the farmer makes straw from there to feed livestock they could ingest it.”

According to the U.S. Department of Agriculture, cattle can be poisoned from eating as little as 300-500 grams and may die within a few hours after consumption. Toxicity changes little if plants are fermented with silage or dried in hay.

Another problem is the possibility of children getting into it, even if they aren’t ingesting it.

“It causes a rash that can be really bad, sometimes worse than what you see with poison ivy,” George said.

He added it can often be confused with Queen Ann’s Lace, though poison-hemlock grows taller, up to 6-10 feet. It also resembles wild carrot.

Poison-hemlock can be controlled with herbicides, such as 2,4-D or Roundup.

“You have to be careful when spraying for it,” George said. “2,4-D is good because if you’re spraying in ditches it won’t kill the grass. Roundup will kill it but it’ll also kill everything else.”

He added Henry Soil and Water Conservation District crews have a regular ditch maintenance schedule of the more than 400 miles of ditches it is responsible for in the county. Those crews have been spraying in ditches on this year’s schedule, but George said they have been getting requests to spray in other ditches as well.

Due to the lack of manpower, those requests often cannot be fulfilled.

The plants can also be mowed or tilled over.

“People need to educate themselves on how to handle it.”

Below are some additional facts about poison-hemlock, courtesy of the Ohio State University College of Food, Agricultural and Environmental Sciences. 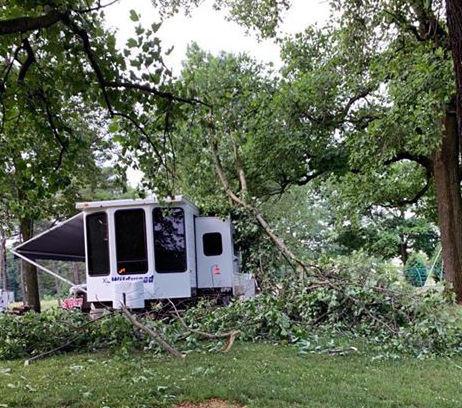 The area saw some storm activity into Saturday morning. This courtesy photo shows a tree damaged in a storm that fell onto a camper site at Harrison Lake State Park. It was reported no one was injured.

LEWES, Del. (AP) — A swimmer in Delaware was caught on camera prying a shark’s mouth open with his hands this weekend in an effort to free it from a fishing hook.

The video shows the man grabbing onto the shark at a beach in Cape Henlopen State Park. He went into the water to unhook it after another person caught it, the Daily Times of Salisbury reported Tuesday.

“Everyone started yelling, ‘Shark, shark, get out of the water!’” said Delaware native Rachael Foster, who shared her video on social media. “It was so crazy, like a movie. Like Jaws.”

The newspaper reported park rangers were on site Sunday to assist and monitor the situation.

Earlier this month, a boy was hospitalized for puncture wounds after he was possibly bitten by a shark in the park. The boy, 12, was surfing when something bit his leg. Officials then temporarily closed the park’s Herring Point to surfing and swimming.