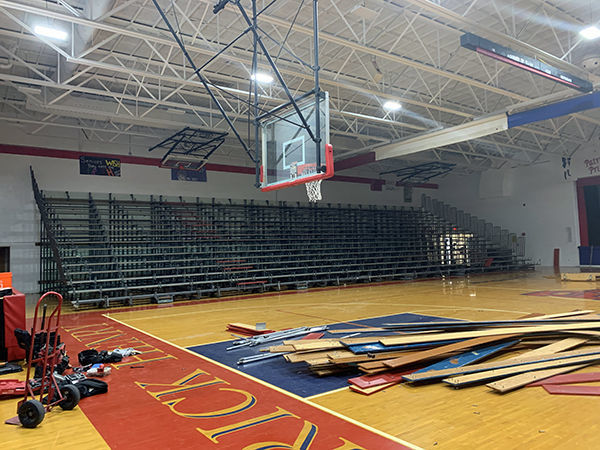 Work on the bleachers at Patrick Henry High School’s gymnasium started while students are on leave from the county’s schools. 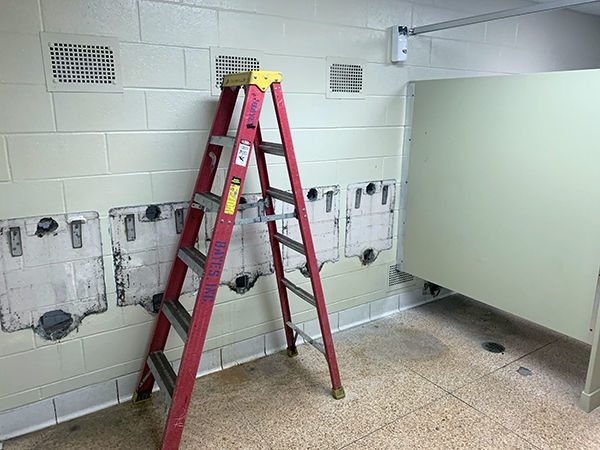 Planned renovations to the north bathrooms and locker rooms at Patrick Henry High School were able to start as school is not currently in session.

Construction on residential structures on Clairmont Avenue continued as of Friday.

Work on the bleachers at Patrick Henry High School’s gymnasium started while students are on leave from the county’s schools.

Planned renovations to the north bathrooms and locker rooms at Patrick Henry High School were able to start as school is not currently in session.

Construction on residential structures on Clairmont Avenue continued as of Friday.

The construction industry likely can continue operating normally in the short term, but finishing projects could become a problem if the health emergency lasts several months.

As of late last week, many local companies were continuing to work, with an employee answering the phone at Nagel Construction last week saying the office workers were working from home, but projects in the field continued. She also said the offices were closed to the public.

Work was also continuing on a housing project on Clairmont Avenue as of last week.

However, that may change now. Napoleon Public Works Director Chad Lulfs said he shut down all projects going on within the city at the end of day Monday.

“I have concerns for not only my employees and the construction crews, but I have to be able to pay the contractor for the work that is done,” Lulfs said. “With limited income tax and utility payments, this would soon be very difficult.”

He added typically he has three inspectors available to inspect projects going on in the city. Work may continue on the waste water treatment plant rehabilitation.

A survey recently conducted by the Associated General Contractors of America (AGC) found that 28% of respondents said a government agency or owner ordered a halt to a project as of March 19. In addition, 18% reported a shortage of inspectors for their job sites.

Demolition has also started for the north bathrooms and locker rooms in the gym area.

It was also reported the asbestos removal team was on site last week to remove some of the remaining asbestos tiles. This is a continuation of a project that was started over the Christmas break.

And while it was not part of the grouped phase two projects for the high school, a walking/running track was installed last week on campus. The district board of education approved this addition in the fall.

The Ohio Department of Transportation (ODOT) also seems inclined to continue projects at this time, although a spokesperson said the larger projects will be left to the contractor to whom the agency awarded the bid on a given project.

“ODOT’s larger construction projects are contracted. We set the scope of work and the overall timeline in the plans, but the day-to-day is up to the contractor,” said Rebecca Dangelo, public information officer for ODOT District 2, which includes Henry County.

“Therefore, I cannot speak on how the individual contractor companies are addressing this situation or if it will impact the projects. To my knowledge, ODOT is not looking at shutting down any projects,” she added.

“Construction workers’ unique skills are essential now and in the coming weeks to construct, maintain, and repair critical infrastructure, and to build temporary health facilities and retrofit and expand existing ones,” said Stephen E. Sandherr, chief executive officer of AGC.

“Labor and management construction industry partners continue to monitor and provide guidance on all recommended health and safety job site precautions for construction workers so that proper measures are deployed to ensure a safe work environment for those on the job,” he added.

As of now, the City of Napoleon continues planning a few construction projects that could take place this year, including a new pool facility.

Napoleon Parks and Recreation Director Tony Cotter said the city is still moving forward with the pool plans and specifications, but construction of the facility, slated to begin in the spring, could be hindered.

“One of the many requirements of building a new swimming pool is that the final plans and specifications have to be submitted to and approved by the Ohio Health Department prior to construction,” Cotter said. “We do not know to what extent that division of the department is involved in the current situation and if the turnaround of the approval process will be impacted.”

Other potential city projects include infrastructure work on American Road that could begin in spring, and ground could be broke on a convenience store with gas station in the fall.

He added Italy and some other countries have shut down shipments of material, adding to the problem.

“It may become more of a problem for contractors to complete projects,” Simonson said.

In AGC’s survey, 16% of respondents reported a shortage of equipment or material, while just under a quarter percent (22%), said they heard from suppliers that deliveries will be late or canceled.

In the immediate future, contractors could see a spike in projects requested.

“In the short term there will be a limited number of requests for hospital and screening facilities, maybe lab facilities for testing or producing equipment,” Simonson said.

In the longer term, he said newer businesses could spring up with people working more from home.

While there likely will be some volatility over the next several months, Simonson remains optimistic overall.

“We’ve seen the U.S. economy bounce back from every bad situation in the past with an upturn in construction,” Simonson said.

GWAR in the time of COVID-19 self-isolation