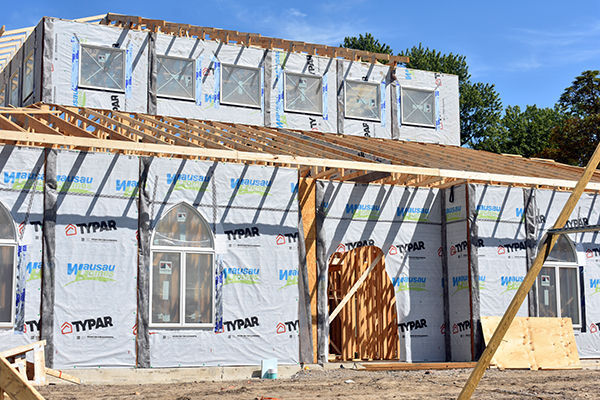 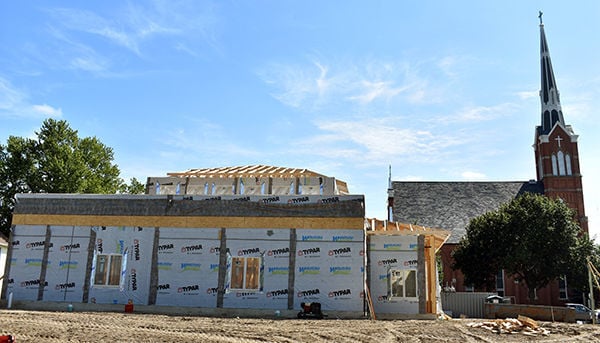 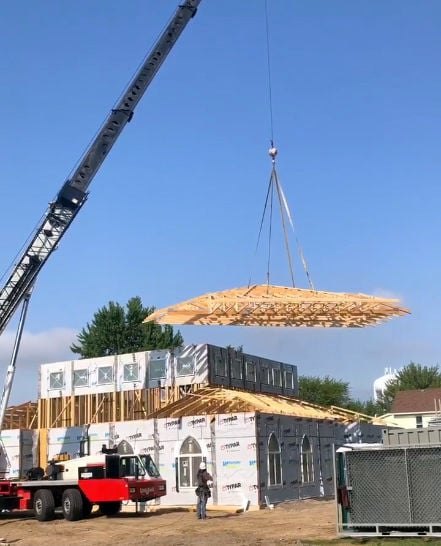 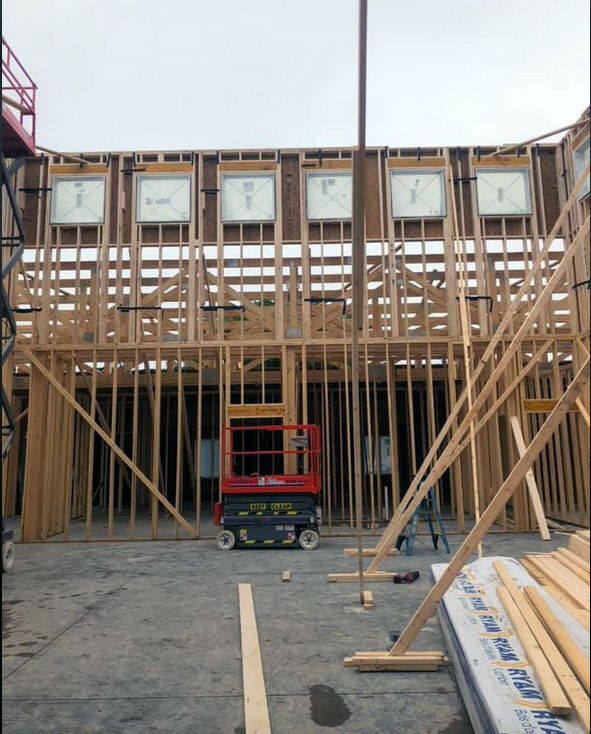 Pictured is an in-progress photo of the St. Augustine Catholic Church office/ministry center interior while the building’s walls and roof were placed last week.

Pictured is an in-progress photo of the St. Augustine Catholic Church office/ministry center interior while the building’s walls and roof were placed last week.

Another update to the downtown Napoleon area will provide St. Augustine Catholic Church with a new office and ministry center.

A lot adjacent to the church and school building previously featured mobile units, but these have been cleared to provide a full-featured building for the church, school and community.

Father J. Douglas Garand said the project is something that has been worked on for approximately five and a half years.

“When I first arrived here at the parish, we had a series of meetings that were hosted in parishioners’ homes, and one of the things that came up most often was that we needed to have some new facilities in the parish,” he said. “We needed the offices to be updated. They were a temporary solution that had been here for 20-some years. They were mobile units that were definitely past their life expectancy. So we were working on talking about what we needed and what people wanted, and a new parish office and ministry center was really how that came to be. The people were sharing with us what their vision for the future was, and so this really came from those meetings, organically from the parish.”

The full scope of the building will include the parish offices, as well as three different meeting rooms.

Garand said plans for the meeting rooms include providing space for the school, finance and pastoral councils, as well youth group meetings and activities. The St. Monica Room is the centerpiece of the building. It was reported to be 30’ by 30’ and includes a clear second story for the purpose of featuring windows to allow as much light as possible into the room.

Another key benefit to the expanded space is in providing a separate location for the St. Vincent de Paul food pantry in the back of the building.

“They will have their own entrance and they can operate independently of the rest of the building, which is good because, previously, we couldn’t operate at the same time,” Garand said. “If the parish office was open, the food pantry couldn’t be open. So, this way, we can hopefully serve a lot more people in regard to what the food pantry can do, and the food pantry will have more space than they previously had.”

The construction of the building was put into motion in November, which is when the parish office temporarily relocated to its downtown space.

“We are downtown in the Vocke Building,” Garand said. “We have been there since last November, that way everything else — the mobile units could be moved off, and the site work could be ready — for this summer. We weren’t quite sure exactly when things would start, but we were working and moving ahead with faith that it would start. We had everything ready to go, that way Rupp-Rosebrock, the general contractor, could make all of the arrangements and have all the room they needed to make this happen.”

The current project time line has the building construction completed in April, at which time a move-in will begin. Garand said the building will feature space not previously available to the church, and new furniture will be brought in for those areas.

While the parish office and ministry center is the current highlight project for the church and school, Garand said there are multiple parts running at the same time to keep the facilities updated.

“We’ve already finished the school roof, as well, and we’re hoping to do some work on the church eventually — paint the interior, redo the pews in the church, and to continue to enhance the liturgy and celebration in the worship of God,” Garand said.

Garand added work is also underway on the front steps of the church in order to do moisture abatement at the front of the structure.

“When you’ve got a 140-year-old building, you always have something to do,” he said. “There’s always something being done to the church because it’s kind of the center of our worship, but also, it’s an old building. We’re working at keeping it up and making sure it lasts well into the future for, not just people now, but for future generations.”

Once the new building is complete, Garand said the parishioners can focus on how it can be used to benefit everyone.

“We’re definitely very excited for what this means for ministry for the future, because it’s really a way that we can grow and expand the ministry of the parish, by not just having meetings in here, but offering Bible studies and adult education and continuing the education of young people,” he said. “It’s all going to be able to expand what we have the capacity for because we never had this kind of meeting space, other than the parish hall, which is in the basement of the church and the school gym.

“I’m very grateful for the generosity of the parishioners, and even non-parishioners have contributed to the campaign,” Garand continued. “It’s just so edifying that so many people have contributed their resources to make this happen. This really is a vote of confidence, not only for what’s going on right now, but for the life of the parish moving into the future. So we can serve not only our community at St. Augustine, but the whole city of Napoleon and beyond, and really be a beacon of light and of hope for people right here as we serve in this ministry of Jesus Christ.”

Acosta to McEnany: Shouldn't the President tell the truth?