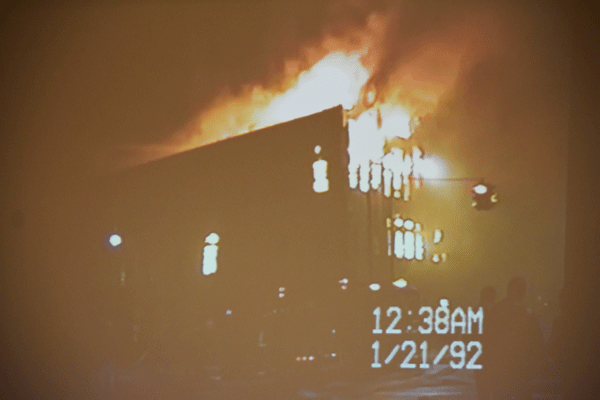 The former New Wellington Hotel is seen ablaze on the night of Jan. 21, 1992. The fire, which claimed three lives, was reviewed recently by local firefighters as part of their continuing education. 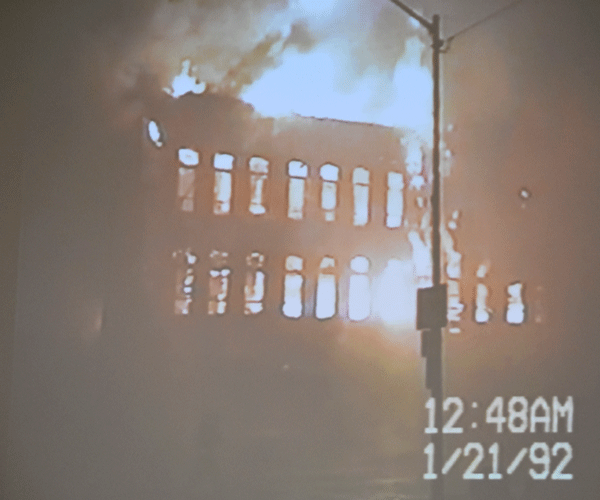 The former New Wellington Hotel is seen ablaze on the night of Jan. 21, 1992. The fire, which claimed three lives, was reviewed recently by local firefighters as part of their continuing education.

Members of Henry County fire departments gathered at Liberty Center High School Saturday to revisit the New Wellington Hotel fire that occurred in downtown Napoleon just after midnight on Jan. 21, 1992. The event was hosted by the Henry County Fire and EMS Chief’s Association as part of a continuing education program for local firefighters.

Audio from the emergency dispatches the night of the fire was played, and the original call indicated a fire had broken out on the second floor of the hotel that had turned into low-income housing and that people were trapped inside.

“There’s people hanging out of the windows,” one dispatcher reported.

Interviews with firefighters who battled the blaze indicated they were able to use ground ladders to rescue many of those people.

A Jan. 28, 1992, article in the Northwest Signal also said two local residents, Kevin Custer and Jim Meyer, who happened to be playing cards in the Town Tap when the fire started, also helped rescue about half a dozen fire victims using ladders.

Firefighters at the time believed the fire started in one of the stairwells, which were also part of the building’s emergency exit plans. This hampered efforts of residents to escape.

The fire spread quickly in the structure that was built in 1901, and water being applied to the fire seemed to have almost no effect.

One of the corners of the building collapsed around 2:43 a.m.

Crews from Defiance, Ridgeville Corners, Liberty Center, Malinta, McClure and Wauseon were among those who responded with mutual aid according to the audio dispatches.

The blaze was mostly under control by 6 a.m., but several days after were spent by fire crews searching the charred remains of the building for three people reported missing and believed killed in the fire.

Missing were Roger Butts, 6, and Kevin Brown and Richard Rhodes, both males in their 20s. A few days later, three bodies were found in the debris and later identified as the missing victims.

Communication during the fire was a topic of conversation for the training program. It was explained to the younger firefighters that the emergency radio system of the day allowed for radio traffic to “walk over each other,” meaning while one person was talking another could also.

Former Ridgeville Corners Fire Chief Dexter Benecke, who was among those who organized the training, pointed out the fire indicated a need for a newer radio system.

“And 27 years later, Henry County is trying to get a new radio system going,” Benecke said, referring to the emergency radio system currently being implemented around the county.

That radio system will provide greater range of communications, as well as provide a more efficient system during a large response event such as the New Wellington fire.

Still, important communications were made in 1992 in the heat of the moment. Dispatchers could be heard on the audio tape relaying information to crews at the scene, especially as it related to possible victims.

At one point, a dispatcher reported a four-month old was reported as missing and still in the structure on the second floor if crews could make it there. They did, and the child was rescued.

Early in the fire, calls went out to all emergency medical technicians from around the county to respond, which they did.

Henry County Hospital was contacted in the initial stages of the response warning staff there that more personnel likely would be needed, and later that multiple victims were headed the facility’s way.

Benecke said the incident command system was just starting to be implemented around the time of the fire, but crews were still learning how it worked when the New Wellington fire broke out.

“Today, we have more accountability from everyone,” Benecke said. “There’s a lot more organization now and everybody has a role.”

Another thing that has changed is that every fire is being treated by those who fight it as a hazardous material event.

“They have found people are getting cancer from the contaminants in the smoke that gets on their clothes and gear,” Benecke said.

He added some departments, if they can afford it, provide more than one set of gear for firefighters. Many of the crews also bring a change of clothes to wear until the ones they were wearing can be cleaned.

Every community has a "nightmare building," and the New Wellington Hotel was Napoleon's in 1992.

Then-Napoleon Fire Chief Scott Highley called the structure "Napoleon's nightmare building" during interviews just after the fire, and during video interviews later said every community has one.

"It's that building that as a firefighter you just hope never catches fire," Highley said in an interview.

The fire was believed to have started in one of two stairwells that were supposed to be part of the emergency exits for the building. This prevented people from the upper floors from escaping using them.

The month before the fire, an inspection showed multiple fire code violations, including the fire suppression system failing. Highley said the owner of the building was cooperative and tried to fix the violations when found.

However, it was still believed the fire system of the building failed the night of the fire.

The inspection also showed batteries removed from smoke detectors by many of the residents. The former hotel had been turned into low-income housing by 1992.

Residents interviewed just after the fire reported it was not a safe place to live.

"Every community has a nightmare building," Highley said during a 1992 interview. "An incident will happen someday, and you have to be prepared for it, even if you're a small community."

Democratic candidates hone in on Nevada ahead of caucuses