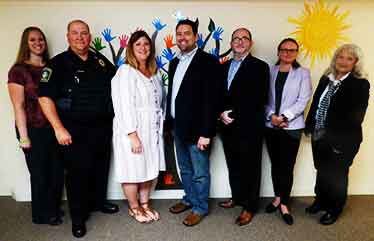 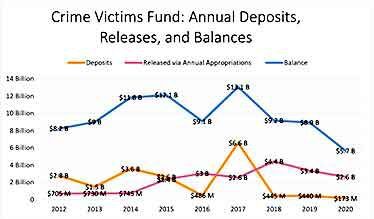 This graphic shows the balance levels dropping since 2017 in the federal Crime Victims Fund.

This graphic shows the balance levels dropping since 2017 in the federal Crime Victims Fund.

While funds are drying up for centers that advocate for child victims, the case numbers keep increasing for domestic violence and serious injury incidences.

“Then when I looked at other numbers it was just huge,” she added.

“We see a broader spectrum of things from our end,” said Lt. Edward Legg of the Napoleon Police Department. “Of course, we had COVID, but we also had that increase in substance abuse and increase in alcohol use, which all ties into what we’re talking about here.”

While the case numbers for domestic disputes have increased, the funding through the Victims of Crime Act (VOCA) has been reduced.

“We lost $2.6 million just last year to give to the CACs around Ohio due to the cuts through VOCA,” said Brad Feldman, executive director of ONCAC.

“They’ve been cut almost 70% over the last three years,” he added. “It’s just been devastating.”

There is a newer version of the bill, but funding through it will not be made available in the immediate future, and the levels at which it will return is not yet known. Feldman said the account fund needs to be replenished.

According to the National Network to End Domestic Violence (NNEDV), politics hasn’t played a role in the cuts, but rather a change in strategy for federal prosecutors.

NNEDV says the Department of Justice is relying more on deferred and non-prosecution agreements, which are technically not required to be paid into the VOCA fund. The group says changing that, which the new bill seems to do, would stabilize the fund and fend off future cuts.

Feldman also pointed out Ohio is one of only seven states in the country to not fund CACs with a line item in the state budget. The group tried to get it added during the latest state budget, but was unsuccessful.

Mack said funding from VOCA in the past completely paid for one advocate’s position, including benefits.

“Now she’s being supported by general funds,” Mack said. “We didn’t want to lose that position.”

Cutting that position would have meant only one full-time advocate being available in Henry County. Mack said the CAC really needs two, and could use a couple of part-time advocates as well.

“Our goal is to try to make sure we have the funding to help support your efforts,” Feldman said.

The decrease in funding, as well as small staff, also makes it difficult for the Henry County CAC to continue to go into schools and provide educational programs on teen issues such as sexting.

Mack said the trainings are free to the schools, and she doesn’t want to start charging for them.

“We’ve just never charged the schools to come in and educate the kids,” Mack said.

Feldman said ONCAC recently applied for a $3 million grant he said would help CACs with their educational programs if it is approved.

He also said the organization is asking for a one-time infusion of cash from the state through the American Rescue Plan Act (ARPA) federal funds.

McColley said he would be willing to support such an effort, as long as it is understood it’s a one-time only measure. He also encouraged ONCAC to continue to lobby for the line item in the state budget.

Mack said the Henry County CAC did not have to eliminate any staff during COVID, and was still able to service 22 children in 2020 despite the pandemic restrictions.

Unfortunately, nearly everyone agreed the full impact of the last year may not be felt for another four or five years.

Why FDA advisers did not recommend booster shots for everyone

Police say they don't know where missing woman's fiancé is