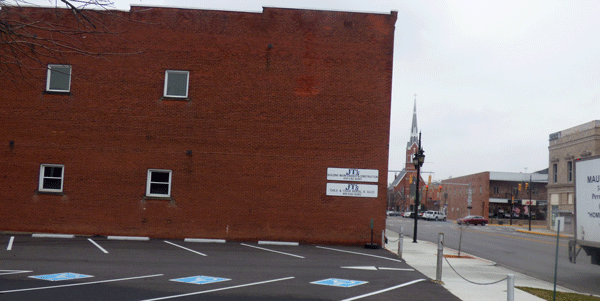 After initially proposing to have some say ahead of time on murals painted in the downtown, a city committee has decided to leave things as is for now.

The Napoleon Municipal Properties, Buildings, Land Use and Economic Development Committee has been discussing the issue in light of at least one mural set to be painted on a downtown building in the near future. There have also been discussions of others being painted.

Last month, the committee suggested designs of murals should be brought before it for prior approval to make sure nothing lewd or improper was being put on the side of buildings.

However, it also asked Napoleon Law Director Billy Harmon to research the topic so as not to inadvertently violate any First Amendment rights of free speech.

Staff also checked what other municipalities have done.

City Manager Joel Mazur said the City of Worthington a few years ago also tackled the issue and reviewed a couple of planned mural designs. He said one proposal was not to the city’s liking, and a task force was initially formed but then city officials decided to leave the matter up to its sign code.

Harmon said he believes the city’s current sign code, coupled with state laws, are enough to legislate the issue.

“I don’t think we should regulate any further than we currently do in the sign code,” Harmon said.

He added the only community locally that has tackled the issue is Toledo, which has some code sections stating permits are needed for murals. The city arts commission also tries to regulate murals or artwork in public spaces.

Harmon also said some other communities in the area that are more Napoleon’s size specifically exempt murals from their sign code.

“Ours doesn’t quite go that far, but it does make clear the majority of it deals with commercial speech,” Harmon said.

“We have ordinance and state statutes in place to regulate certain things that might be of concern, such as obscene material or lewd material or graffiti,” said Harmon.

He added the city’s sign code would likely be the most defensible argument if a case should go to court because it is content neutral with some restrictions on commercial speech.

Harmon also said the Napoleon Preservation District could potentially have a say if artwork were put up in the city’s preservation district.

“To suggest that the (mural currently being planned) needed to come here for approval in any way, there are no regulations on our books regulating something like that,” Harmon said.

With building murals becoming popular, and one project getting underway in a few months, city officials want to ensure they stay artistic and …

Blagojevich: Trump didn't have to do this