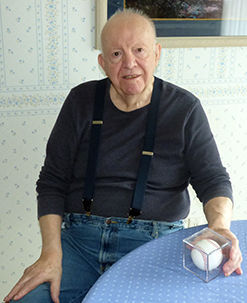 Gary Grim is pictured in his Defiance home with a baseball autographed by Major League pitcher Ned Garver, a Ney, Ohio, native. Baseball has been a big part of Grim’s life and he recently recalled Joe E. Brown’s visit to Holgate for the dedication of a baseball stadium.

Gary Grim is pictured in his Defiance home with a baseball autographed by Major League pitcher Ned Garver, a Ney, Ohio, native. Baseball has been a big part of Grim’s life and he recently recalled Joe E. Brown’s visit to Holgate for the dedication of a baseball stadium.

HOLGATE — Gary Grim recently reminisced about the visit of Holgate’s own Joe E. Brown for the dedication of a baseball field in Brown’s honor six decades ago.

Grim now lives in Defiance, but, at that time, he said he lived seven miles south of Holgate on a farm. Grim said baseball was one of the activities that was engrained into his childhood.

“I really enjoyed baseball, I really did,” he said. “At home we had a baseball diamond. I had a brother that was three years older than me, he was a catcher in high school. We had a mound and the backstop — dad let us have the ground for that.”

Grim said it was common on Sunday afternoons for area children to travel to the diamond for games of baseball. Even without a field loaded with kids, Grim and his brother used their ingenuity to be able to play games on the diamond.

“We took 8 oz. empty cans and set them up in the infield, and you got hits if you hit between them,” he said.

Grim remembered the property had a machinery barn in left-center field that resulted in a ground-rule double if the ball reached that far and a fence by an apple tree in left field marked home run territory.

“I started out batting right-handed, but when we set up this diamond, I started batting left handed,” he recalled. “If I needed a home run, I’d go left handed to try to hit that home run.

“I really enjoyed my childhood,” Grim said. “I had more fun just doing everything, mainly playing baseball and basketball. Basketball was my brother’s forte, but basketball was not my best sport.”

Grim said he first learned of Joe E. Brown’s visit through the newspapers.

“My first reaction was, ‘Who’s Joe E. Brown?’” he said with a laugh. “Then, you know, my parents would start to tell me he’s comedian — he’s a movie actor. That’s how we learned about him. When he came to town, they had a picture of him in the paper and a big write-up on him announcing that and the date he would be coming.”

Joe E. Brown was a popular comedian in the 1930s and 1940s and has credits in films including “A Midsummer Night’s Dream” and “Some Like It Hot.” The New York Times’ obituary for Brown printed on July 7, 1973, detailed his love for baseball, noting his Warner Bros. contract involved a clause the company maintain a baseball team for him among employees of the studio, his part ownership of the Kansas City Blues for a short time and his stint as a pre-game and post-game announcer for the Yankees.

At the time of the dedication, Grim said he was in the earlier years of participating in the local baseball program.

“I was in — they called it Pee-Wee League then. I was the Pee-Wee League pitcher for Holgate,” he said. “I don’t know who the administrator was, the mayor or whoever, but, they wanted to dedicate the Holgate stadium. It was a fantastic place.”

Grim said the stadium included an elevated press box, a concession stand, a water fountain and stadium seating. For a field at this time, Grim said having lights was a big deal.

“The stadium — in fact they had the best baseball stadium I know of in northwest Ohio, lights and the whole works,” he said.

To mark the occasion, Grim said a monument was placed on the site.

“What they did, first of all, was they built a small monument in centerfield with a flagpole and a bronze emblem or marking on it that said ‘Joe E. Brown Stadium’ and the date and so forth,” he said. “They invited Joe E. Brown, and he came to Holgate that day. There were, I’m guessing, somewhere between 800-1,200 people there. It was packed.”

He said the stadium seating was approximately 120 feet long with seating five or six rows back, and this was filled with the attendees of the event.

Grim said the most common question he gets from the experience is “Did you get his autograph?”

“No. At that age, you don’t think about that,” he said with a laugh. “I never thought about it.”

But Grim added he does have the autograph of Ned Garver, a Ney, Ohio, native who pitched for the St. Louis Browns in the Major Leagues.

“I talked to him for 20-30 minutes when he lived in Ney one summer afternoon. Fantastic guy,” he said.

“He had the voice, the personality. That’s what he did,” Grim said. “He did a fantastic job.”

Grim said he pitched through high school for Holgate, and said he notched no-hitters against Hamler and Malinta. He said the Hamler game was especially memorable due to the weather.

“At Hamler, their diamond sat way back from the school. There was no water, it’s about 85 in the shade and we didn’t have a drop to drink. If we would have known about it, we would have brought our own,” he said with a laugh.

Grim said he did make an attempt at the Major Leagues, going to a tryout camp in Kalida, but he didn’t make the cut.

“Garrold Parrott (who is the namesake of Patrick Henry’s ball field), who was a coach, after high school, I got to be friends with him,” Grim recalled. “He told me one day, ‘Did you know how fast your fastball was?’ We had a (radar) gun and my top speeds were 88-89 miles per hour. Back then, that was pretty fast. He’s a super nice guy and a really good coach.”

Grim also talked about some of the players he said Parrott coached, including Dave Seemann and Jerry Fosnow.

“(Seemann) got into the minor leagues and I talked to him afterwards,” Grim said. “He was a really good pitcher. He was better than I was.

“(Fosnow) made it to the Major Leagues,” Grim added. “I saw him one Saturday afternoon on the television and couldn’t believe it.”

Grim’s love of sports continued into adulthood, as he said, at age 21, he took and passed his licensure test to officiate basketball in the state. He said he eventually worked his way up to officiating college basketball games, and his local officiating experiences led to him working with Napoleon’s Charles Buckenmeyer.

“I worked with him a lot. Super nice guy. Not only a good official, but he was a good guy,” Grim said. “He was funny. He just had a personality.”

Grim shared one of his favorite experiences with Buckenmeyer came from a time they were traveling to Ottoville for a game.

“I thought I knew a shortcut, going down a county road,” Grim said. “I’ve never been on it before, but I looked on a map, so I thought I would take this road because it was shorter.

“I was driving, and we go over this little hill and the road comes to a T just like that. I put on the brakes, and we probably slid 20 feet. ‘Grim, you’re trying to get me killed,’ he said.”

Grim said thankfully the vehicle was able to stop before the intersection and no traffic was oncoming.

Even with a career full of memories, though, Grim said the Joe E. Brown dedication 60 years ago really sticks out.

“I thought, and especially for me personally, I can picture it when he threw the baseball out to me, you could imagine a 12-year-old, how do you really describe the feeling?” he asked. “You have to be bubbling inside. It’s a tremendous, tremendous feeling. To see all of these people, that’s the most people I’d ever seen or pitched in front of. That was really something.”

The dedication was held that day, and then Grim stepped up to play in his game.

“I talk about my memory, but, to be honest, I can’t remember if I won or lost. I’d like to think I won,” Grim joked. “I do remember this very clearly — this stadium, it was packed and people were standing just watching the whole event.”

Grim said it was an important day for the community and everyone involved.

“I’m sure there was a buzz,” Grim said. “You can imagine, if you grew up in Holgate, Ohio, or the Holgate area, and someone in your area made it big, as far as acting, and was going to come back and dedicate the ball diamond, that would be a big thing. Holgate has always been a big follower in sports, they always have. The people are that friendly, that conscious of the situations, they have pride (in their sports). They have a lot of pride.”

Conway: Giuliani will likely never see inside of courtroom again unless as defendant