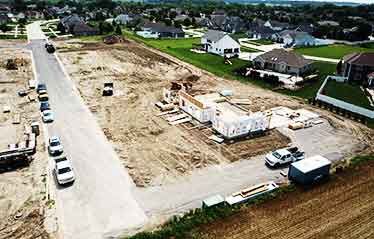 Above is an aerial photo of the West View Villas housing development Beck’s Construction Co. is working on currently. The company is celebrating 50 years of business. 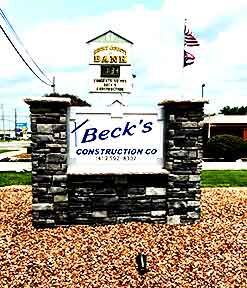 Above is the sign for the headquarters of Beck’s Construction Co.

Above is an aerial photo of the West View Villas housing development Beck’s Construction Co. is working on currently. The company is celebrating 50 years of business.

Above is the sign for the headquarters of Beck’s Construction Co.

For 50 years, Beck’s Construction Co. has been building homes in northwest Ohio, but they haven’t been doing it alone.

Owner Greg Beck said his mother and father, Frances and Robert Beck, started the company in 1971. Prior to that, the elder Beck was working for a contractor in Toledo.

A shift in the industry to use subcontractors to avoid union labor led to Robert’s crew being dismantled. Beck said his father then decided to strike out on his own and build houses.

“He went up to Defiance Home Savings and Loan to get a loan, and Clyde Lloyd there said, ‘I’m not going to give you one loan, I’m going to make you take two,’” recalled Beck, who was 14 at the time. “So that’s how we started. Two loans for two spec houses.

“Everything else turned into history,” he added.

Beck said by the early ‘80s the Napoleon market alone wasn’t enough to grow the company, which was looking to expand, and Beck’s Construction Co. began working in the Defiance area.

“We started building in Defiance and that went really well for a lot of years,” Beck said.

In 2005, the company was looking to expand into another market again and settled on some property purchased in Bowling Green.

“We’re now in those three markets now, mainly Napoleon and Bowling Green, and that’s kind of where our focus has been as of late,” Beck said.

Over the years, a lot has changed in the industry, including better energy efficiency from insulation, windows and heating.

One thing that hasn’t changed over the years is the need to build good relationships with customers and especially other businesses.

“We’ve had a lot of relationships, we’ve made good relationships with a lot of other companies that helped us go a long way,” Beck said. “You don’t survive without it.”

He particularly named the Gerken Companies and The Henry County Bank as two Henry County businesses that have contributed to the longevity of Beck’s Construction Co.

“They (the Gerken Companies) gave us a lot of work over the years to keep us going,” Beck said. “And we’ve been involved in projects with them, and it’s just a great company that wants to keep things moving in the area.”

One of those current projects is a housing development on Clairmont Avenue in Napoleon at the site of the former Napoleon West Elementary School.

Known as West View Villas, Beck said that development has been one of the company’s most successful.

“We had 10 closings there last year, we’ve never had that many in one year before,” he said.

To show appreciation for those who helped with the company’s success for 50 years, it is hosting a barbecue catered by another local business Friday from 1-5 p.m. at its headquarters located at 1414 N. Scott St. in Napoleon.

Beck added the housing industry in the area remains strong and he expects it to be so for another three or four years, especially as lumber prices start to come down.

He also said there were several years in the area where enough housing wasn’t built, and it will take time to make that up.

At 64, Beck is beginning the process of phasing out of the company and selling it to another local person. However, he said that will be about a 6-7 year process.

“I’m not going anywhere right away,” he said with a laugh.

Why Missouri congresswoman slept on the Capitol steps