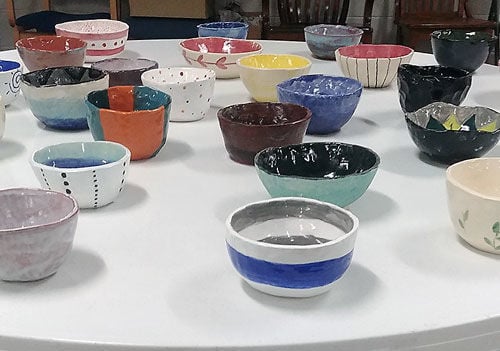 An Empty Bowls Fundraiser set for Thursday will benefit Pillars of Success. Pictured are sample bowls that were created by Napoleon High School art students for the event. 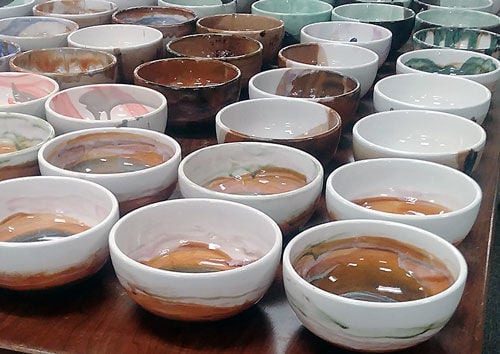 An Empty Bowls Fundraiser set for Thursday will benefit Pillars of Success. Pictured are a sample of bowls that were created by local artist Melanie Wilson for the event.

An Empty Bowls Fundraiser set for Thursday will benefit Pillars of Success. Pictured are sample bowls that were created by Napoleon High School art students for the event.

An Empty Bowls Fundraiser set for Thursday will benefit Pillars of Success. Pictured are a sample of bowls that were created by local artist Melanie Wilson for the event.

WHAT: Empty Bowls Fundraiser to benefit Pillars of Success, a local organization that helps provide short-term housing and refer supportive services to the homeless.

DETAILS: The fundraiser is being organized in partnership with Thrivent Community — Wayne Park.

Marcia Gobrogge, representing Thrivent Community, explained the fundraiser is intended to reflect the atmosphere of a soup kitchen. Those attending are asked to make a donation, suggested at $10, when entering and they will select a commemorative bowl painted by local artist Melanie Wilson, artists from Soaring Arts Studio and Napoleon High School art class students.

A variety of soups, including some with meat and some vegetarian, are being donated by local businesses and individuals. Attendees will choose their soup — using either their new commemorative bowl or a disposable bowl — and will also receive bread and water.

“They can help out the community and they can learn more about Pillars of Success and what they do for our community,” Gobrogge said, adding no products will be sold during the event.

The Empty Bowls fundraiser concept has been done around the world and is intended to raise both awareness of hunger and homelessness and raise money to help address the need.

Pillars of Success is a nonprofit organization which started helping Henry County families in mid-2015 and has focused on helping provide transitional housing to individuals who are homeless.

Barbara Hoffman, who is president of Pillars of Success, said homelessness in Henry County is a hidden need because those who are homeless are often “couch surfing” — rotating between staying with different family members or friends, living in their cars or in tents or renting a motel room.

The non-profit organization, which receives referrals from Henry County Job & Family Services, Help Me Grow, A Renewed Mind and the court system, has helped approximately 25 families since it started, although Hoffman said the organization is limited to assisting around five families per year due to financial resources, as well as the fact all of those involved are volunteers. Families who contact them but can’t be assisted are given referrals to other agencies and organizations. Since the first of this year, Hoffman said they have referred 24 families.

Donations received by Pillars of Success are used to provide assistance with rent and utilities to the families in the program. In addition, families are provided with assistance to learn about budgeting and other needed life skills as identified by the volunteers who provide home visits.

“People in Henry County have been great,” Hoffman said, adding they have received support from the United Way of Henry County, multiple churches and the Four County ADAMhs Board. She added they have also received donations of couches, beds and other furnishings that help families when they move into transitional housing.

“If they’re living in their car, they don’t have furniture,” Hoffman said, adding the donations help the families from having to spend larger sums of money on purchasing those items.

There is a work requirement to be included in the program, and Hoffman said those supporting the organization value that there are requirements to receive the assistance.

“We’re not a handout, we’re a hand up to help,” she said, but added they haven’t had much of an issue with rules not being followed.

In addition to helping raise funds for the organization, Hoffman said she hopes the event will raise awareness of not only homelessness but also those struggling with poverty and how that affects decisions people make.

“I want people to understand it’s not that people are lazy,” she said, adding many of the people experiencing homelessness are part of the cycle of generational poverty. “They don’t have an example. They don’t know any different.”

Gobrogge said Thrivent Community Dollars are being utilized to organize the event as Thrivent’s mission is to help others be wise with money and give generously.

“It’s a need in our community that we saw,” Gobrogge said of why Thrivent chose to support the event.

All retail bankruptcies are not the same. Here's what you need to know

Police chief to Trump: If you can't be constructive, keep your mouth shut