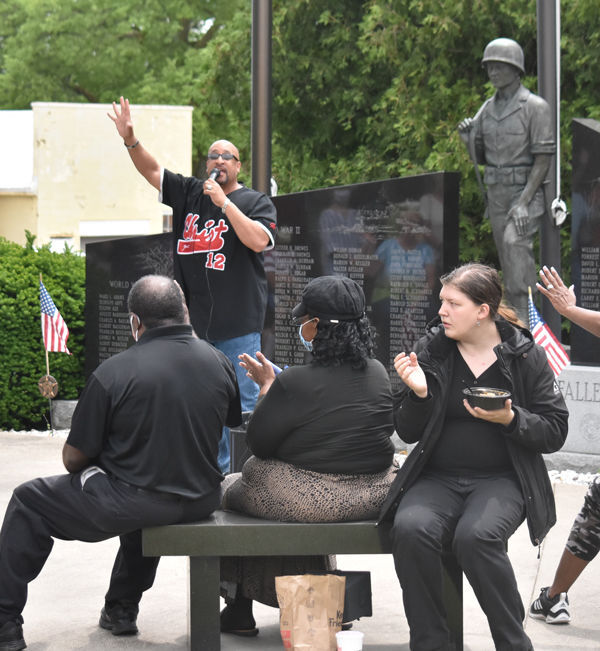 Pastor Ray Gaffney of Galilee Baptist Church of Defiance speaks to a gathering of people who came to pray for the nation at the Henry County War Memorial in Napoleon Thursday afternoon. 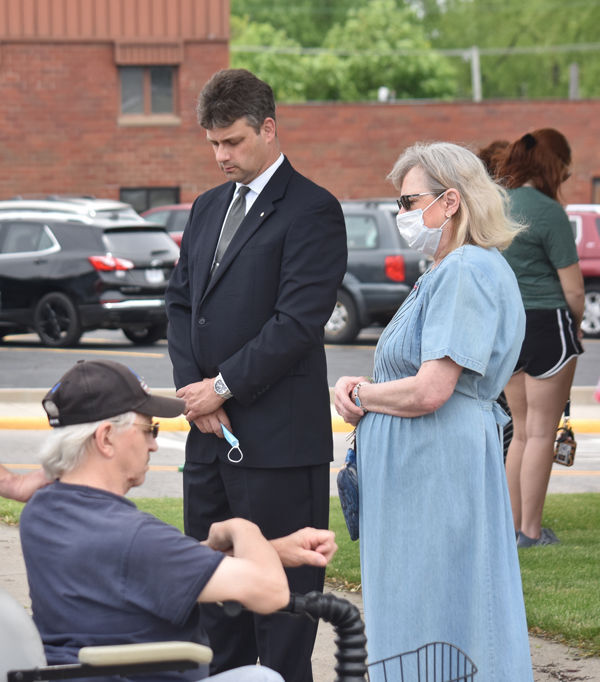 Napoleon Mayor Jason Maassel joins in small group prayers during a gathering of churches Thursday at the Henry County War Memorial in Napoleon.

Pastor Ray Gaffney of Galilee Baptist Church of Defiance speaks to a gathering of people who came to pray for the nation at the Henry County War Memorial in Napoleon Thursday afternoon.

Napoleon Mayor Jason Maassel joins in small group prayers during a gathering of churches Thursday at the Henry County War Memorial in Napoleon.

With the country in turmoil, a gathering at the Henry County War Memorial in Napoleon Thursday came together to pray for unity.

Pastor Ray Gaffney of Galilee Baptist Church of Defiance and Pastor Jeff Wallen of First Baptist Church of Napoleon spoke to a group of approximately 50 people about the power of prayer within today’s troubled times.

“This is a positive cause,” said Gaffney, who began the program. “We are not here to protest, we’re here to pray. Our country needs prayer right now. There is a pandemic, protesting and politicians who don’t know what to do.”

“We need some courage today as the disciples of Christ,” he said to the gathering. “If we see someone being mistreated we need to say something.

“All of us can play a part in making America great again,” added Gaffney, who made the analogy of a puzzle. “Every piece of the puzzle matters, if one piece is missing it doesn’t count. We all have a role, and your role is important. We need the courage to step out and make a difference in your community and sometimes that starts within our own family.”

Wallen said seeing the people gathered to pray for the country acknowledged there is a problem in the United States.

“By attending here today you feel something is wrong with our nation,” said Wallen. “I support protesting in the right way. That is part of our rights as a nation. I don’t feel anyone following the scriptures can support rioting.

“I’m afraid we as a nation are reaping what we have sewn,” he continued. “We have sewn to the wind and are reaping the whirlwind.”

Mack also addressed the crowd at the end, saying he was not there just as the police chief.

“Yes, I am the police chief, but I am here as a father and a citizen of this community and as a friend,” said Mack.

Lejman-Guy in her closing prayer asked people to seek out each other for guidance.

“We need to open our ears and listen to the people around us,” she said. “We need to step out of our comfort zone and get to know who our neighbor is.”

Here's what Trump said about Confederate flags in 2015

Why state lawmaker says his state's contact tracing is a 'joke'

Trump asks Bubba Wallace to apologize. This was his response