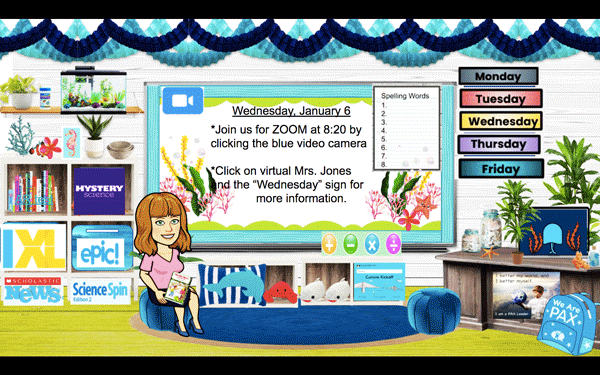 Above is a screen shot of Debra Jones’ virtual classroom. Students can click on the different graphics to receive assignments, join the Zoom class, receive a daily pre-recorded video message from Jones, take quizzes or even watch fish swim in the virtual aquarium during down time. 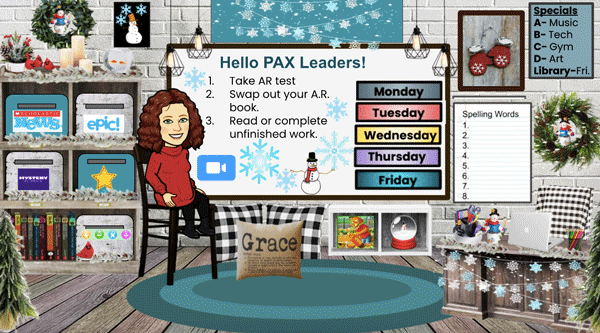 This screen shot shows Julie Wiemken’s virtual classroom. Teachers are able to personalize their virtual classrooms and change them as much as they wish. Wiemken changed hers to match the seasons.

Above is a screen shot of Debra Jones’ virtual classroom. Students can click on the different graphics to receive assignments, join the Zoom class, receive a daily pre-recorded video message from Jones, take quizzes or even watch fish swim in the virtual aquarium during down time.

This screen shot shows Julie Wiemken’s virtual classroom. Teachers are able to personalize their virtual classrooms and change them as much as they wish. Wiemken changed hers to match the seasons.

In spring of last year, teachers were blindsided with sudden orders from the governor that students would stay home but educators were still expected to teach them.

Some struggled with teaching virtually, students missed spending time with friends and parents often found themselves having to try to teach their children subjects they had not thought of in several years.

However, many educators worked, including over the summer, to develop online strategies in case in-person learning was not available.

Napoleon Area City Schools recently came off a week in which instruction was all online in order to minimize risk of exposure to the COVID-19 virus after the holidays.

Debra Jones, a second grade teacher at Napoleon Elementary with 31 years of experience, said while she hopes they don’t have to go virtual again, she feels the week was a success.

“Before March of last year, I had never used Google Classroom and didn’t know much about it,” Jones said.

“The school did give us some training last year, but for the most part we used YouTube videos. Heather Bachman is a technology teacher in our district and she helped people and our technologies coordinators for our district, Jacob Gebers and Jared Rex, they were stretched so thin that a lot of us were left scrambling to do things ourselves,” she added.

However, over the summer, Jones said she participated in weekly Zoom sessions with other teachers from around the state, who would come together and share ideas.

“They were talking about these virtual classrooms, and I was like, ‘What in the world is that?’” Jones said.

The virtual classrooms are a link students can go to on the internet. They can be designed to even look pretty similar to what the physical classroom looks like.

“My classroom theme this year was the ocean, so I made my virtual classroom mimic my real one,” Jones said.

She added doing so required several hours of finding and piecing together graphics onto a template provided by Google, as well as the links. She has mostly left hers intact through the year, but another second-grade teacher, Julie Wiemken, changes hers to match the seasons and holidays.

The virtual classroom has a wealth of resources to help students through their learning day, including, in Jones’ case, class assignments for each day, the weekly list of spelling words that need learned, accelerated reader quizzes, handwriting series and ways to communicate directly with her if there are questions.

In fact, while conducting the Zoom interview for this story, a student “popped in” to ask about the specialty assignments for the day.

“It really becomes kind of a one-stop shop,” Jones said.

“We’ve been practicing this since September, just in case we ever did have to go remote,” Jones said. “That made this week a whole lot easier.”

She added the theory behind the setup is to keep it simple for the children and to take some of the burden off parents.

“That way parents don’t have to be so encumbered by it, because they’re trying to work a lot of times,” Jones said.

“I typically start at 8:20 and go straight through until 11 a.m. without any break in the Zoom at all,” Jones said. “We start out with attendance, then math class, then I go into reading groups and after that we do language arts lessons together.”

At 11 a.m. was lunch break, followed by paperwork. Jones said this way the students weren’t on the computer the entire time.

“Then in the afternoon there’s a question and answer period,” she added.

All but one of her students were present virtually Monday, and then Tuesday and Wednesday every student logged on.

“It’s been wonderful,” Jones said. “It’s been smoother for everybody. I feel like everybody’s come a long way and I think a lot of teachers have put in a lot of work in the summer and after school to get things up and running in case we ever went remote.”

She said the effort and result is something the teachers can be proud of, and in some ways going virtual can help students learn at their own pace.

However, she still prefers the tried and tested method of teaching.

“Us meeting face to face is something we’re more natural at, we enjoy it a lot more,” Jones said. “We’re kind of in the people business, so we enjoy the interaction with the kids. Not having that except through a screen is not as fun.”

Where do Ivanka Trump and Jared Kushner go from here?

Guess what Chobani's making now (Hint: It's not yogurt)