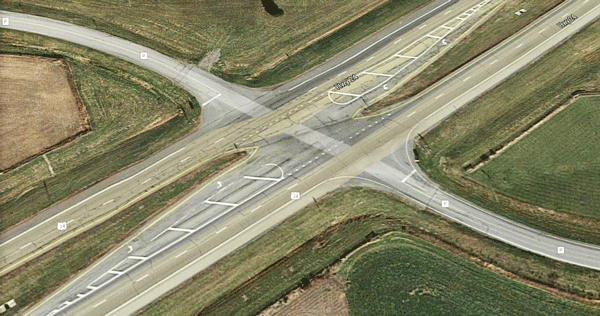 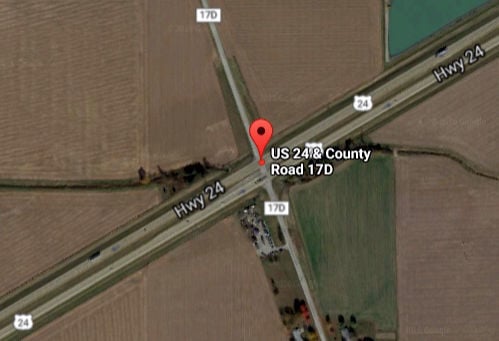 Solutions to a high number of crashes at the intersection of U.S. Route 24 at County Road 17D in Henry County are being discussed. The Ohio Department of Transportation is seeking $10.9 million through a state safety program to improve the intersection.

Solutions to a high number of crashes at the intersection of U.S. Route 24 at County Road 17D in Henry County are being discussed. The Ohio Department of Transportation is seeking $10.9 million through a state safety program to improve the intersection.

There aren’t any major projects scheduled by the Ohio Department of Transportation (ODOT) in Henry County for 2019, but funding for two big safety projects is being sought.

The Henry County commissioners met Thursday morning with representatives of ODOT District 2 and the Ohio Department of Jobs and Commerce to talk about transportation projects in the county.

ODOT District 2 Deputy Director Patrick McColley said the district is working with the city for one safety project and the county on another. Whether either is funded should be known in late June.

The safety project in Napoleon would build a roundabout at the intersection of westbound U.S. 24 and State Route 108. The area has been a concern for city officials for several years due to pedestrian traffic walking from nearby hotels into the city though there are no sidewalks available.

“It’s very dangerous and been talked about for years,” McColley said. “A roundabout will let this flow really nice and it will be a much safer intersection.”

He added he knows roundabouts are fairly new to the area and not very well liked by many motorists, but he said they allow traffic to flow better and are safer.

The project is estimated to cost $3.9 million, with Napoleon’s share being $391,000. It would add sidewalks to the area as well as the roundabout. If approved, construction would begin in fiscal year 2022.

There have been numerous accidents in those areas since the highway was widened, with some of those being fatalities.

“It scored better than I thought it would, but the problem is we’re still asking for a lot of money and this is a program all around the state,” McColley said.

The project cost is estimated at $10.9 million, with a $2 million local match.

In the meantime, it’s very possible the median access at County Road P may be closed off in the near future anyway.

“The comments that I’ve heard, especially about County Road P, is the people at least that have said something to me, they would have no problem with you putting barricades in there right now,” said Henry County Commissioner Glenn Miller.

He added some research would need to be done first to make sure such a move would be okay.

McColley pointed out the close proximity of the interchange of U.S. Route 6 to County Road P would make it easy enough for motorists to get to the other side of the road if necessary.

He added this likely would increase traffic on Bales Road and Glenwood Avenue. A public announcement will be made when ODOT is ready to proceed.

“It’s been awhile since there’s been a fatality there, but if you close it off maybe we can stop another one,” said Henry County Commissioner Bob Hastedt.

Napoleon was favored with good timing on its application for a road safety project on State Route 108 just north of the city.

Are there any pictures of what this might look like? I am having a hard time picturing how a roundabout would work there. I don't mind them at all, just not seeing it there with the semi traffic. I had always thought stoplights would be good there on both side of the overpass. Semis pulling out in front of me regularly.

How coronavirus moves through the air beyond coughing