Above is the aquatic center at St. Henry, which is of a similar design to the one Napoleon has approved. 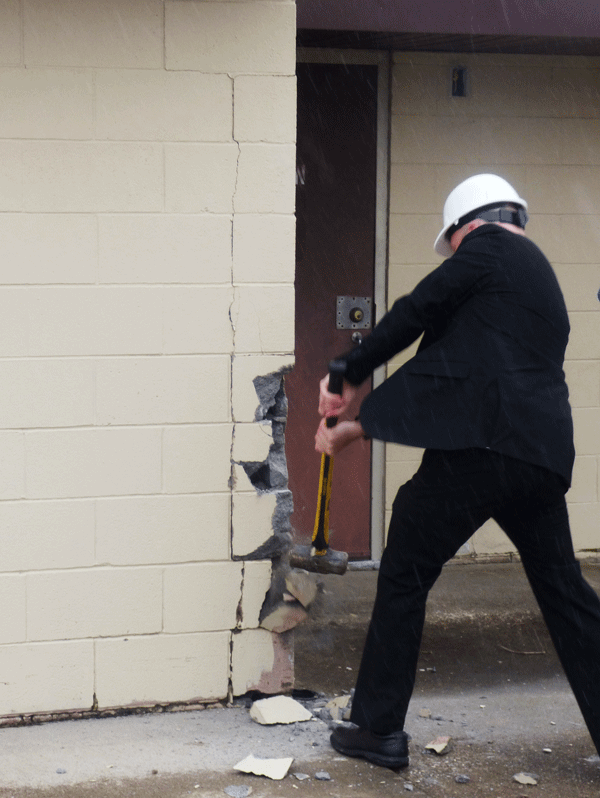 Napoleon City Manager Joel Mazur takes his turn at the sledgehammer Tuesday morning as part of a ceremony to mark the demolition of the Napoleon pool. A new facility will be built later this year and opened next year.

Above is the aquatic center at St. Henry, which is of a similar design to the one Napoleon has approved.

Napoleon City Manager Joel Mazur takes his turn at the sledgehammer Tuesday morning as part of a ceremony to mark the demolition of the Napoleon pool. A new facility will be built later this year and opened next year.

Napoleon City Council Monday night gave initial approval to a contractor for the new pool project, and officials remain positive the project will stay on schedule.

During its last meeting, council rejected all bids for the project which included a new pool facility and features, as well as a new bathhouse and clubhouse building, because the bids were over the 10% allowed.

Council Monday night approved first reading of a resolution to enter into a contract for just the pool facility portion of the project. The building will be re-bid at a later date.

City Manager Joel Mazur said he was only requesting first reading Monday night because there are still some pricing issues that need to be worked out, but he hoped to have those clarified when council meets again in two weeks.

The building will be smaller, including a smaller deck size and fewer restrooms, but Mazur said the priority has been on the pool.

“We were able to work in all the alternates that we wanted to, the only thing we omitted from this contract was the rock climbing wall, and that could be added in later if everything comes in under budget,” Mazur said.

The facility is expected to include two large slides, a children’s slide, an eight-lane competition pool, splash features and shade structures.

He added both those buildings will, however, be upgrades from what was there before.

The levy will last 20 years and adds an estimated $67 to the annual property tax bill of a $100,000 home. It will generate $5.2 million, though the new pool construction is expected to be capped at $3.9 million. The remainder would help pay on the debt of the project, as well as set up a maintenance fund.

Though the original timeline had construction starting this summer, officials believe the delay will not change the target opening of Memorial Day.

City Public Works Director Chad Lulfs said the contractor could begin construction in September or October and he expects the timeline to remain.

“We do have time to meet that schedule still,” Lulfs said.

In other business, council:

Passed, under suspension of the rules requiring three readings, ordinances dealing with transfers and appropriations.

Passed third and final readings to amend certain sections of the water and sewer rules and to enter into a grant agreement with the Department of Homeland Security. Both pieces of legislation also had emergency clauses.

Approved a bid of $79,000 for concrete crushing, though the budgeted amount of $100,000 likely will be spent. The city uses the concrete in project and currently is out, causing it to pay upwards of twice the price of crushing to purchase stone.

Accepted a $500 grant for school threat assessment training for the school resource officer.

With bids all coming in more than the 10% over estimate allowed by state law, Napoleon will be moving ahead with the pool project but scaling …

Who is Kamala Harris? A look at her life and career in politics

Pence stumps for Trump in Arizona