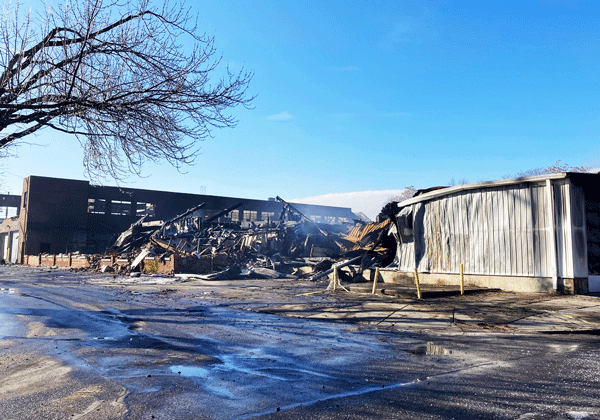 This photo shows the aftermath of Tuesday morning’s fire in Defiance.

This photo shows the aftermath of Tuesday morning’s fire in Defiance.

A large structure fire was reported on Jackson and Davidson streets in Defiance just before 2 a.m.

Napoleon Fire Chief Clayton O’Brien said his department responded for mutual aid at 2:10 a.m. with an engine and five personnel. They were back in Napoleon at 6:30 a.m.

A resident near the area, Sarah Florence, took photos and posted video to her Facebook page.

“There were explosions all night that seemed to fuel the fire even more,” Florence said. “It was kind of crazy.”

She added she believed there were new owners of the building that were trying to improve it.

Florence said it took about six hours before the fire was under control. Departments from Sherwood and Cecil were among those also reporting, according to Florence.

The Defiance Fire Department reported there were no injuries, and the fire remains under investigation.

According to a Facebook post by the Andrew L. Tuttle Museum of Defiance, the location was originally the Defiance Candy Co. in 1911.

It has been the site of several dairy operations since 1917. It was the original site of Swift Poultry, Eggs and Creamery before becoming Three Rivers Dairy.

It has also been the site of Nafzigers Ice Cream.

Sanders on what happens with proposed minimum wage increase now

This is what's in the $1.9 trillion coronavirus package

Doctor who voted to approve Johnson and Johhnson vaccine speaks out