Napoleon’s Erica Meyer sets the ball during the Lady Cats’ Volley for the Cure match with Patrick Henry Monday in the Grand Canyon. 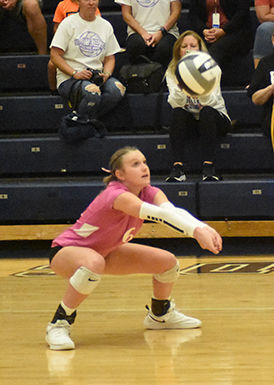 Patrick Henry’s Baylor McGraw bumps a pass during the Lady Patriots’ match with Napoleon Monday in the Grand Canyon.

Napoleon’s Erica Meyer sets the ball during the Lady Cats’ Volley for the Cure match with Patrick Henry Monday in the Grand Canyon.

Patrick Henry’s Baylor McGraw bumps a pass during the Lady Patriots’ match with Napoleon Monday in the Grand Canyon.

Thirty-nine matches had passed since Napoleon’s volleyball team last experienced the feeling it had Monday night.

Winless entering Monday’s non-league match with Patrick Henry, the Lady Cats had won just two sets this season and had not won a match since the middle of the 2019 season.

“For the program it’s huge, but individually, for those girls, it was amazing,” Napoleon coach Danielle Cramer said. “Something that we’ve been working on all season and even last season, is cut out those roller coasters, cut out those errors, keep the ball on their side, make them make the mistakes. And they did that tonight. They battled hard and I’m very proud to be their coach tonight.”

The win was the first three-set varsity win for Napoleon’s senior class.

Napoleon improved to 1-8 and Patrick Henry fell to 3-4.

After trading points to open the match, the Lady Cats set the tone. Olivia Bump, a senior who aced the final serve to secure the win, elevated for a block on one of PH’s most dangerous hitters for a 3-2 set-one lead. Napoleon later claimed a 7-6 lead when Molly Rees hammered a point from left to right and led for the rest of the set.

“Our serving was on, our blocking was on, our hitting was on. Yeah we made errors, but my girls battled very hard tonight and I hope that they’re proud because I am,” Cramer said. “Our record doesn’t reflect how much effort the girls actually put in to practice and how much they put into the games.”

Consecutive points from Patrick Henry brought it within 20-16 in the fourth set before Bump combined with Kora Burill for a tipped block. Three straight PH miscues then set the stage for Bump at the service line.

With a 24-17 lead, Bump launched a serve deep onto the Lady Patriots side just inside the back line prompting an animated team celebration.

“Not going to lie, I was a little nervous but I knew I had to get it over. And as our coach always says, you never miss on the last serve,” Bump said.

Bump along with Rees proved to be a dynamic threat at the net all night.

Mired in a back-forth battle deep into the third set, the Lady Patriots knotted the score at 26-all. Rees answered with a kill before Bump’s aggressive block at the net gave the Lady Cats a 28-26 win.

Trailing in the fourth set, Rees assisted with a block to tie the score at 11, spiked a kill for a two-point lead and teamed with Bump for a block to take a 15-12 lead and force a PH timeout.

Napoleon did not trail again.

“I told our team, ‘That’s what happens when you continue to give them free balls.’ We gave them way too many free balls and I’m not surprised that Napoleon took advantage of that,” Patrick Henry coach Jill Jolliff said. “They’re a good team, so when they get free balls, they pounded it down our throats.”