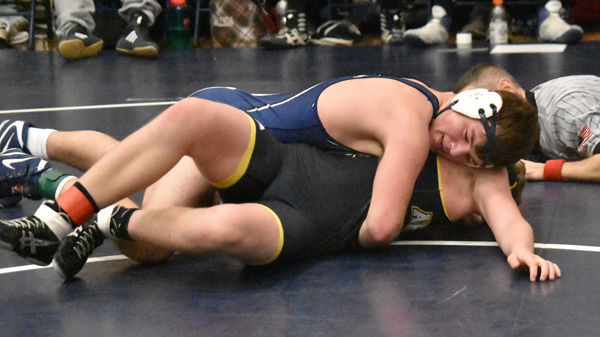 Napoleon’s Landon Eberle pins his opponent during a match with Fairview Saturday at the Gold Medal Duals. 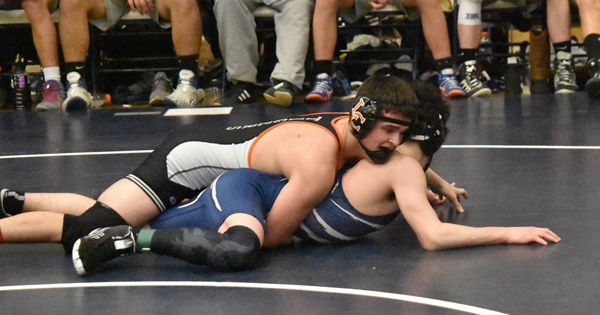 Napoleon’s Landon Eberle pins his opponent during a match with Fairview Saturday at the Gold Medal Duals.

It was a tale of two days for Napoleon and Liberty Center at the Napoleon Gold Medal Duals this past weekend in the Grand Canyon.

The two teams faced off each day of the tournament, with each team claiming a victory. The Wildcats avenged Friday’s 41-26 loss with a 45-27 victory Saturday in the semifinals of the tournament.

Napoleon then lost to Versailles, 35-30, in the championship match to take second place at the tournament, which had to be revamped because of the weather Saturday.

“Honestly, there were a lot of ups and downs,” said Napoleon wrestling coach Jason Seiler. “I thought we wrestled a lot better today (Saturday). We didn’t want it bad enough against Liberty Center (Friday). We turned that around today and that was good to see.”

The Tigers avenged a loss to Norwalk on Friday with a 57-22 victory Saturday. However, Liberty Center then lost to the Wildcats, who they beat the night before.

“First, and foremost, we battled every match,” said Liberty Center wrestling coach Troy Westhoven. “I thought we started really well, beating Norwalk, but then stepped back against Napoleon.

“We have to have that will to win,” added Westhoven. “We had it last night (Friday), but today Napoleon wanted it more.”

The Gold Medals had to be restructured after Genoa was unable to return for the second day of competition due to road conditions.

The remaining eight teams did three rounds of round robin wrestling with the top two teams in each pool advancing to the championship round and the bottom teams in consolation matches.

In the semifinals, Napoleon jumped out to an early lead over Liberty Center with Tanner Garber (113), Claude Buckmaster (120) and Brayden Hull (126) winning by pin.

Caleb Sell picked up a big win for Napoleon, winning a 5-2 decision at 145. Tyler Bostelman and Angelo Gonzalez followed with pins to push the Cats’ lead to 33-9.

The Tigers closed the gap with Camren Foster winning by pin and Owen Johnson claiming a 4-2 decision at 182 pounds. Napoleon closed the match, winning three of the final four matches for a 45-27 victory.

Xavier Johnson, Demitrius Hernandez and Xavier Rodriguez all won by pin for Napoleon, while Ray Culler won a 6-1 decision for Liberty Center at 220 pounds.

In the championship match, the Wildcats again got off to a good start, with Buckmaster and Hull winning by pin and Omar Estrada winning a 7-4 decision. Also winning for Napoleon were Bostelman by pin, Gonzalez 3-0, Johnson 8-3 and Hernandez 3-0.

However, the Wildcats, who were leading 30-24, lost its final two matches and fell to Versailles 35-30.

Hernandez and Hull each went 9-0 for the Wildcats over the weekend, while Matthews, Vollmar and Foster were undefeated for the weekend for the Tigers.

Napoleon is back in action Friday, hosting Defiance in a dual match at 5 p.m. Liberty Center is at the Sally George Invitational Friday and Saturday.