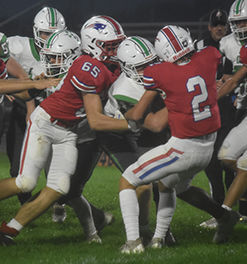 Patrick Henry defenders Will Seedorf (left) and Lincoln Creager work together to pull a Delta running back to the ground during Friday’s Northwest Ohio Athletic League football game. 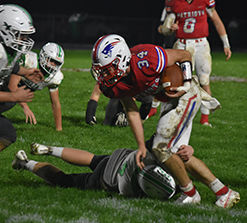 Patrick Henry defenders Will Seedorf (left) and Lincoln Creager work together to pull a Delta running back to the ground during Friday’s Northwest Ohio Athletic League football game.

With five wins and a matchup with unbeaten and No. 1-ranked Division VI Archbold looming in the regular season finale next week, the Patriots desperately needed a win.

Despite a misty haze floating through the stadium all evening, Patrick Henry dominated the first quarter with a tone-setting punch that it rode to a 12-0 NWOAL win over the Panthers at Patrick Henry High School.

“We knew that if we won this game, we’re 100% in the playoffs. And now we’ve even got a decent chance that we could host.”

The Patriots forced Delta, which had scored the third most points this season among all eight NWOAL schools, into a three-and-out on each of its first two possessions.

Patrick Henry, which improved to 6-3 overall and 4-2 in the NWOAL, responded to each defensive stand with scoring drives.

Faced with a fourth-and-five inside the red zone on its first drive, PH opted to go for it. Nash Meyer tossed one of his game-high 10 completions to Mason Schwiebert down the seam to bring PH inside the 5. Meyer capped the drive with a one-yard scoring run.

“Mason Schwiebert had one of the biggest plays of the game,” Inselmann said. “A beautiful catch on the tight end drag.”

Meyer connected with Landon Johnson for a 35-yard touchdown, again on a pass through the seam, to take a 12-0 lead as the first quarter ended.

Johnson, who finished with 93 yards receiving and a score on five receptions, broke the PH record for the regular season receptions in a season late in the third quarter. Johnson broke Marc Krauss’ record of 52 regular-season receptions set in 2005.

Meyer, who completed 10 of 16 passes for 118 yards, tied the PH record for regular-season completions in a season. Meyer also led the PH ground game with 26 carries for 85 yards.

Patrick Henry continued its defensive masterpiece with fourth-down stops on each of Delta’s other three first-half drives, including a third three-and-out.

In five second-half drives, Delta (4-5, 2-4 NWOAL) turned it over on down in four of them. The other possession? A third-down interception by senior Timmy Johnson along the left sideline at the 12 yard-line.

“Our defense, what a game. What a game. I can’t say it enough,” Inselmann said. “I don’t think I’ve ever, in my 29 years coaching, had that many fourth-down stops. Ever. That’s phenomenal.”

Two of the second-half stops were stuffs on runs, which Delta needed two yards or less to move the chains. The other two stops were forced incompletions.