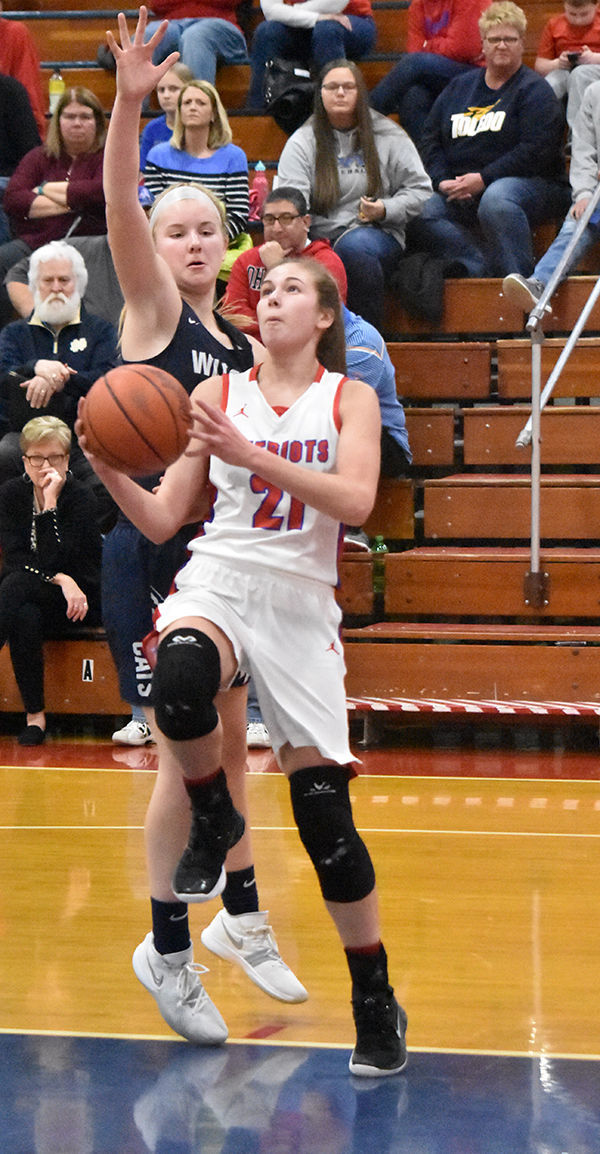 Patrick Henry’s Kayla Prigge goes up for a shot against Napoleon Tuesday night in the House of Heat. 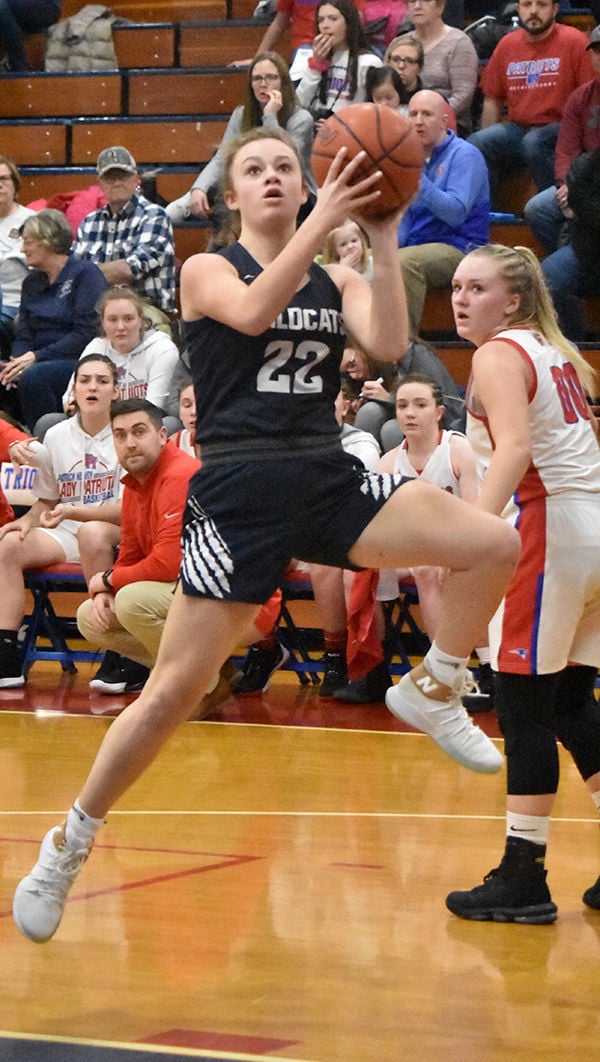 Napoleon’s Emma Pedroza goes up for a shot against Patrick Henry Tuesday night in the House of Heat.

Patrick Henry’s Kayla Prigge goes up for a shot against Napoleon Tuesday night in the House of Heat.

Napoleon’s Emma Pedroza goes up for a shot against Patrick Henry Tuesday night in the House of Heat.

HAMLER — Napoleon, ranked third in Division II, jumped out to a 7-0 lead and never trailed, defeating Patrick Henry 53-30 Tuesday night in the House of Heat.

It was the second win of the season for the Lady Cats over PH. Napoleon also defeated the Lady Patriots in the championship game of the Northwest Signal Holiday Classic in December.

Emily Bostelman came off the bench to lead the Lady Cats with 14 points, while Taylor Strock added 13 and Cait Good tallied 9.

Patrick Henry was paced by Trista Fintel with 9 points off the bench. Carissa Rosebrook and Rachel Nickels each added 5 points for the Lady Patriots.

“The way they execute their defense is as good as it gets,” said Patrick Henry coach Justin Sonnenberg of Napoleon. “We knew we had to play a great game to keep it competitive. Our goal was to give ourselves a chance late in the game and they didn’t let that happen.

“We felt we got some good looks in the first half, but they didn’t fall,” added Sonnenberg. “Maybe if those fall we get some confidence, but they never let us get close tonight.”

“It was a very similar game to last night against Anthony Wayne, a lot of good energy right away,” said Napoleon coach Corey Kreinbrink. “One of our concerns was not having energy to start the game, but we did a good job of getting stops, which led into our offense.

Strock scored the first two buckets of the game and Bostleman came in and right away knocked down a 3 for a 7-0 lead midway through the opening period.

Patrick Henry fought back to make it 12-8 after a bucket by Nickels and a triple from Kayla Prigge. However, Stevie Rieger scored after an offensive rebound with less than a second remaining in the period for the Lady Cats.

Napoleon opened the second period with a 10-0 run to grab control of the contest. Strock started the period with a triple and was followed by baskets from Caely Ressler and Good. Shae Pedroza capped the run with a 3-pointer for a 24-8 lead.

After a free throw and basket from Rosebrook, Bostleman scored 7-straight points for Napoleon, going 4 for 5 from the foul line and sinking a triple to push the Lady Cats’ lead to 31-11.

The teams traded baskets as Napoleon went into intermission leading by 20.

“We can’t make mistakes like that,” added Sonnenberg. “You almost have to play perfect against them because of the caliber team they are and they forced us into some mistakes tonight.”

Both teams scored 7 points in the third period, with PH scoring its seven points in a row and holding Napoleon without a field goal for the first 6 1/2 minutes of the second half.

The Lady Cats closed the period with baskets from Good and Rieger.

“We got sloppy with some stuff,” said Kreinbrink. “We missed some shots offensively, but defensively we got out of position at times, trying to do a little too much. It can be tough to keep that energy up for four quarters when you have such a good first half.

“We had some sloppiness that we want to clean up,” added Kreinbrink. “Overall, we did a good job bouncing back midway through the third quarter.”

The win was a school-record 21st for the Lady Cats.

“We congratulated the kids and made sure they were aware of it,” said Kreinbrink. “Just the focus and the mental grind that the season is, to be able to go through that many games and be able to execute enough to win games against some good teams in some really tough spots says a lot about, not only their talent and athleticism, but their character and mental toughness. It’s obviously not easy to do. We are real proud of everything they have put into the season.”

Patrick Henry is now 9-11 overall and 2-4 in the NWOAL. The Lady Patriots travel to Wauseon Thursday to face league-leading Wauseon (18-3, 5-1).

“We went through a rough patch, but tonight, it might not seem like it, but games like tonight, against a team like Napoleon, will get us ready to go up against Wauseon,” said Sonnenberg. “The league is pretty crazy this year and you want to be playing your best basketball at the end of the year. If we can come back and knock off Wauseon, we can say we’re playing some of the best basketball in the league right now. But Wauseon is so good, hopefully it will be a tough battle.”

Napoleon is now 21-0 overall and 13-0 in the Northern Lakes League. The Lady Cats travel to Northview tonight, having moved their game up a night due to the impending weather. It will be the Lady Cats’ third game in three days, something unprecedented for the program.

“We have to be focused and show some maturity,” said Kreinbrink. “I don’t think physically fatigue will be a factor. I think mentally it can be tough. We need some maturity to go there and be focused. The kids have proven all year they have that maturity, so we will see what happens.”

Deontay Wilder on his humble boxing beginnings and his daughter

Deontay Wilder on fight with Tyson Fury and Anthony Joshua