Napoleon’s Nastya Konstantinova swims the breaststroke as part of the 200 IM during a meet with Springfield last week. The Lady Cats compete at the NLL Championships Saturday at BGSU. 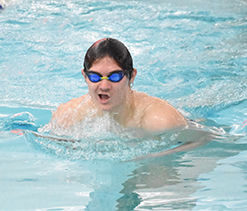 Napoleon’s Mitchell Griffith swims the breaststroke during the 200 IM during a meet with Springfield last week at the NHS Natatorium. Griffith, and the Wildcats, look to win their third-straight NLL title Saturday at BGSU.

Napoleon’s Nastya Konstantinova swims the breaststroke as part of the 200 IM during a meet with Springfield last week. The Lady Cats compete at the NLL Championships Saturday at BGSU.

Napoleon’s Mitchell Griffith swims the breaststroke during the 200 IM during a meet with Springfield last week at the NHS Natatorium. Griffith, and the Wildcats, look to win their third-straight NLL title Saturday at BGSU.

Last season it came down to the final event — the 400 freestyle relay, which Napoleon won to claim its second-straight boys swimming and diving Northern Lakes League title.

This year it could come down to the same race, and if so the Wildcats should be in good position for a three-peat. Kyle Hudson, Brett Bostelman and Mitchell Griffith all return from that 400 free team, with Masen Switzer a good bet to swim the other leg this season.

To get to that final race, Napoleon swimming coach Denise Brown said it is going to take a full-team effort from the Wildcats.

“They are going to have to swim as a team,” said Brown. “We are going to depend on our depth to get us through. Our top guys have to hold those positions and we need some other guys to step up.”

Hudson is the top, top guy for the Wildcats. Along with being on the winning 400 free relay team, Hudson took first place in the 100 and 200 free races, setting both school and league records in each event.

Brown said she must use Hudson wisely in the line-up, as he will be the favorite in whichever two races he is entered.

“We look to see where the other teams use their top guys,” said Brown. “Kyle we can race in multiple events. We want to try and match him up with our top competitor’s best swimmers.”

Griffith, Bostelman, who was third in the 100 backstroke last year, and Switzer, who was runner-up in the 50 free a year ago, are also expected to compete in their respective events and possibly team up for a pair of relay races.

Brown hadn’t set her line-up for the NLL Championships as of press time.

Brown points to Perrysburg as the top contender to the Wildcats for the boys’ title.

Unlike the boys, the Lady Cats are not serious contenders for the NLL title since they have only six swimmers.

“We would like to be in the middle of the pack,” said Brown, whose Lady Cats placed fourth at the league meet last season. “Our girls have won two dual meets and were very competitive in another one.

“I want to put the girls where they can best compete,” added Brown. “We want to have as many of them make All-NLL as possible.”

Hannah Nagel, a freshman, could compete in the 50 free and 200 IM, while senior Nastya Konstantinova is a strong swimmer in all the strokes. Addyson and Macee Speiser are both distance swimmers, while Ruby Morman swims the 200 free and 100 backstroke and Mary Carpenter is another good all-around swimmer.

The NLL Championships begin tonight, with the diving competition at Napoleon High School at 5 p.m.

Mara Cashman and Emma Dirr are the top divers for the Lady Cats, while Payton Allen dives for the boys team.

'Man, I didn't want to let him down.' How Gary Pinkel instilled loyalty at Mizzou