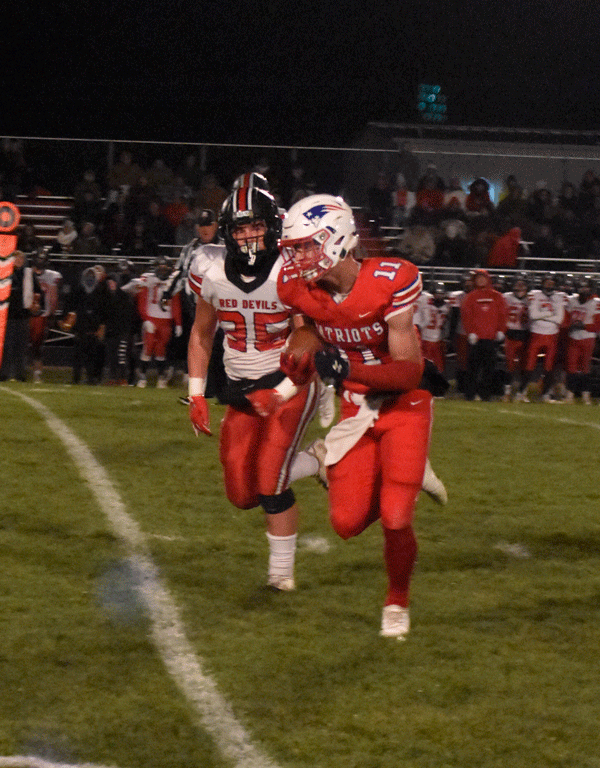 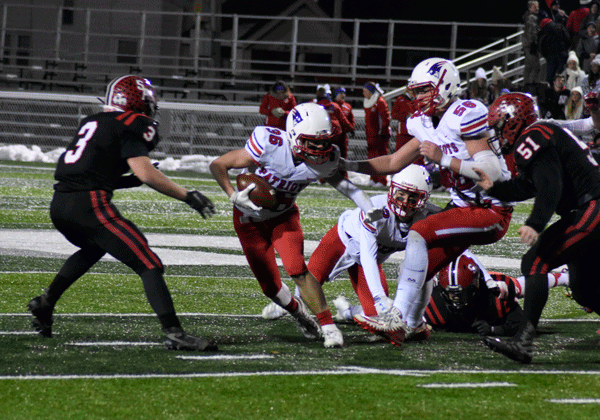 Patrick Henry’s Owen Jardine picks up the ball after recovering a fumble in a second-round playoff game against Norwalk-St. Paul Nov. 16 at Don Paul Stadium in Fremont.

Patrick Henry’s Owen Jardine picks up the ball after recovering a fumble in a second-round playoff game against Norwalk-St. Paul Nov. 16 at Don Paul Stadium in Fremont.

Win, and go to Canton to play for a state championship. Lose, and put away the football equipment until the end of the summer.

Patrick Henry (10-3) and Marion Local (11-2) meet Saturday at Spartan Stadium in the Division VII state semifinal three years after the Flyers knocked off the Patriots 35-7. Marion Local would go on to win the state championship with a 21-17 win over Cuyahoga Heights.

“We’re going to have to play tremendous football,” Patrick Henry coach Bill Inselmann said. “This is going to be a big challenge for us, no doubt about it.”

The Patriots won their seventh regional title Saturday with a 27-13 win over Leipsic in Defiance.

Senior quarterback TJ Rhamy threw for 148 yards and one touchdown on eight of 10 passing, while rushing the ball 21 times for 101 yards and two scores.

Fellow senior Will Morrow ran 16 times for 64 yards and one score, while Kolton Holloway caught three passes for 68 yards. Clayton Feehan caught three passes as well, including a put-away touchdown from 11 yards out with 1:01 remaining, to gain 44 yards.

“When we have that extra element to our offense in the passing game, we can do so many different things offensively,” Inselmann said. “Having Kolton Holloway back adds that for us, and it really helps to have Clayton Feehan step up the way he did last weekend.”

Holloway has 10 touchdowns on 47 receptions, collecting 1,139 yards in the process.

The Patriots have been dominant in the first half of games this season, out-scoring opponents 112-21 in the first quarter and 128-36 in the second. PH continues the advantage into the third quarter, holding a 75-48 edge, but has been out-scored 117-95 in the fourth quarter and overtime.

Marion Local moved on to its ninth-straight state semifinal, and 18th overall, with a 27-0 win over New Bremen. The Flyers have won six of the last eight state titles,

The Flyers currently hold the Ohio all-division lead in playoff wins with 79.

“Marion Local is one of the great football programs, not just in the state, but in the region and in the country,” Inselmann said. “The amount of sustained success that program has had is astounding. You have to be engaged and ready for anything on every down from them.”

New Bremen averaged 1.8 yards on 40 attempts on the ground against the Flyers. The Cardinals came into the contest with an average of 256 rushing yards per contest.

“Defensively, they’re as good as we’ve seen this year against the run,” Inselmann said. “This is a big matchup for our line. We cannot lose the battle up front, because we won’t be able to establish the run the way we want.”

Kyle Muhlenkamp leads the Flyers’ offense under center, while Dylan Heitkamp shares the load in the backfield with Fleck. Muhlenkamp completed four of eight passes for 100 yards, two touchdowns and an interception against New Bremen, while Heitkamp gained 30 yards on the ground.

The Flyers lost to Columbus-Bishop Watterson and Minster.

“One thing that impresses me about them is their balance,” Inselmann said of Marion Local. “They have a lot of balance and are really good at grinding down a defense. They don’t make a lot of mistakes and do a lot of different things really well.”

Marion Local has won all four meetings in the series. The Flyers knocked off the Patriots 42-7 in the regular season a year ago, but Inselmann said he believes his team has grown since the last meeting.

“This team is playing with a lot of confidence right now,” Inselmann said. “That’s something I keep saying about this group since last year. They learned how to win and they learned how to win with confidence. I know everyone is excited to get another shot at a great team like this, but we have to play football like we have been since the playoffs started.”

The Patriots and Flyers kick off Saturday at 7 p.m. at Lima Spartan Stadium.

Mal Washington: 'We've a responsibility to do more than just hit a ball'