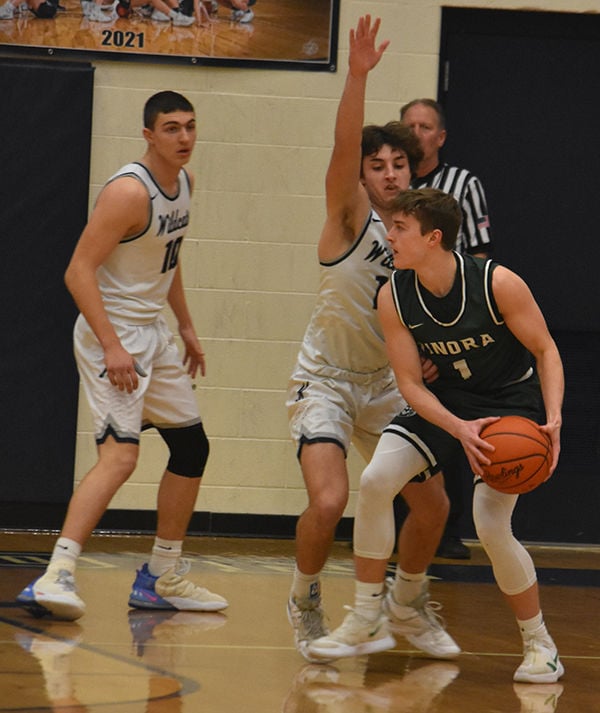 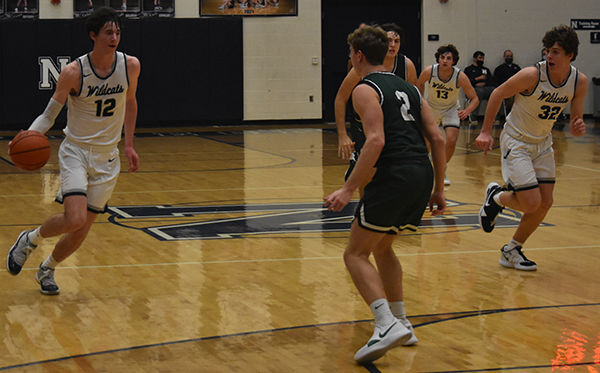 Napoleon pulled away late in the opening period and cruised to a 55-35 victory over Tinora Tuesday in the Grand Canyon.

The Wildcats used a 7-1 run at the end of the first quarter to grab a 15-8 lead and never trailed afterwards. Napoleon had eight players score in the game — all before halftime.

“I thought the first possession was big,” said Napoleon coach Chad Bostelman of Josh Mack’s opening lay-up. “It showed us they weren’t going to double Josh. They didn’t really adjust and that opened up the perimeter for us.

“We were ready to shoot and shoot with confidence,” added Bostelman.

Napoleon was 4 of 7 from 3-point range in the second period, with four players making a shot from beyond the arc. The Wildcats used the hot shooting to build a 33-18 lead at intermission.

Blake Wolf and Zack Rosebrook each hit triples during a 10-3 run to start the second period, while Kaleb Woods and Gaven Brubaker sank 3-pointers in a 6-2 run to end the first half.

“I didn’t think we had any drop off when we went to our bench,” said Bostelman about the Wildcats’ balanced scoring. “Everybody came in ready to make plays.”

The Napoleon coach was also pleased with his team’s passing.

“It’s something we work on,” said Bostelman. “We want to the kids to be free to make decisions, but we want them to make good decisions. Tonight, I thought we did that.”

Tinora used an 8-0 run midway through the third quarter to close the gap to 39-31, but Napoleon scored the final six points of the period and then tallied the first two buckets of the fourth quarter to push the lead to 49-31.

Four players scored during the 10-0 run that covered the two periods. After that run, Napoleon was 21 of 32 from the field.

Tinora was held to 4 points in the final canto.

“The hardest part of the game was dictating tempo,” said Bostelman. “I think we were able to do that and make them take shots they normally don’t want to take.”

Tinora (2-5) had only three players score in the game, with Max Grube and Nolan Shafer each tallying 12 points. Marcus Grube added 11 points.

Napoleon is now 8-3 overall and is off until Jan. 22, when the Wildcats travel to Southview for Northern Lakes League action.

Tom Brady vs. Drew Brees: Clash of the quadragenarian QBs

With ‘The Terminator’ ready to go, Packers know they must neutralize ‘special talent’ that is Aaron Donald