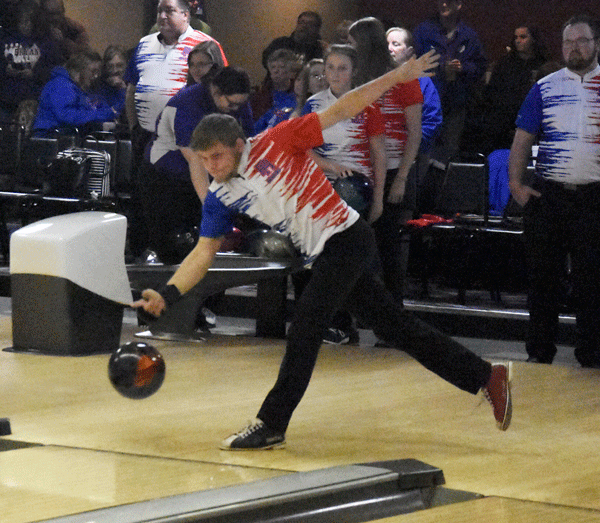 Patrick Henry’s Cade DeLong releases a practice shot ahead of the Patriots’ 2450-2368 win over Bryan Friday at Deshler Lanes. 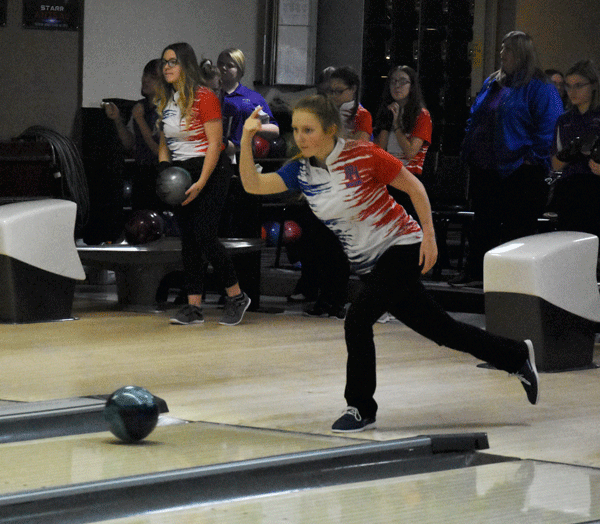 Patrick Henry’s Angeline Parsons follows through after a warm-up shot before the Lady Patriots’ 2449-1994 loss to Bryan Friday at Deshler Lanes.

Patrick Henry’s Cade DeLong releases a practice shot ahead of the Patriots’ 2450-2368 win over Bryan Friday at Deshler Lanes.

Patrick Henry’s Angeline Parsons follows through after a warm-up shot before the Lady Patriots’ 2449-1994 loss to Bryan Friday at Deshler Lanes.

DESHLER — The Patrick Henry bowling teams saw mixed results against Bryan Friday at Deshler Lanes, with the boys beating the Golden Bears 2450-2368 but the girls falling 2449-1994.

In boys action, Kijano Hill led the Patriots with a 418 series, including a 226 in game two, while Aidan Breece and Jaylin Drew each added a 408 set. Cade DeLong turned in a 361 series, while Tyler Piercefield rounded out the Patriots’ bowlers with a 328.

“I thought we bowled really well tonight,” Patrick Henry boys coach Barry Rosebrook said. “I thought we came out really strong, and that put the pressure on Bryan. We got the lead from them and we kept our energy up, which has been a problem for us a little bit this year. We did that today, made good shots and executed.”

Austin Brandeberry added a 372 set for Bryan, which also got a 350 from Caleb Muhe and a 337 from Zane Laurin. Wade Allport rounded out the scoring for the visitors, chipping in a 322 set.

“We just didn’t cover all of our spares today,” Bryan boys coach Dustin Gillett said. “In the first game, we missed eight easy spares to their three. That, just itself, is close to 50 pins. I don’t know what it was in the second game, but I know we missed more than they did. You can’t leave spares when you’ve got two teams like this.”

Patrick Henry led by 103 pins after match play, and Bryan made a brief push to close the gap by winning Baker game one 181-168, but the Patriots responded with a 182-157 win in game two to build a 115-pin lead heading into the final Baker contest.

Bryan won that game with a 210-177 showing, but the hole was too deep to climb out of as PH got the win.

“It makes things a lot easier,” Rosebrook said of having the lead heading into Baker play. “It puts the pressure on them, and they have to execute under pressure. When you have the lead, you can stay relaxed and be confident, and it’s a lot easier to execute when you aren’t putting pressure on yourself.”

Jade Easley added a 374 set for the Lady Bears, who also got a 338 from Gabi Bany and a 333 from Alexis Firm to round out the scoring.

“We did a little bit of playing around in that first match,” Bryan girls coach Kristi Meade said. “We’ve been working on reading the lanes and how to make adjustments on where they need to be, so we’re doing really well with that. Emma did some changes with her balls and playing the lane a little differently, but overall we did very well tonight.”

The Lady Patriots were led by Starr Anteau’s 334 series, while Sarah Breece added a 328 set and Angeline Parsons a 321. Catherine Knapp chipped in a 293 series, while Rachel Breece (149) and Zayna Kuesel (105) each contributed one-game totals for Patrick Henry.

“They’re the cream of the crop,” Patrick Henry girls coach Pat Woods said of Bryan. “But our two games (in match play) were very consistent, with a 761 and a 769. We’re doing okay there. I was really proud of them for their Baker play, too. We’re still continuing and we’re still learning. We’re young, and we’re getting better every week.”

“Our normal gameplay when we’re ahead far enough going into Baker is to change it up and get some of the girls that haven’t had a lot of playing time into the game,” Meade said. “We got Jessie (Federspeil) and Zeby (Sanders) in, which was great.

“The other part of Baker is some of the girls are on different lanes,” Meade added. “Lanes five and six play a little different than seven and eight, so you have to adjust. That’s really what we’ve been working on a lot this year, and I thought they focused on that well tonight.”

Bryan takes part in the Centerville Invitational today, while Patrick Henry travels to Swanton to take on Delta Friday.

Chaunté Lowe: High jumper looking for another chance at Tokyo 2020