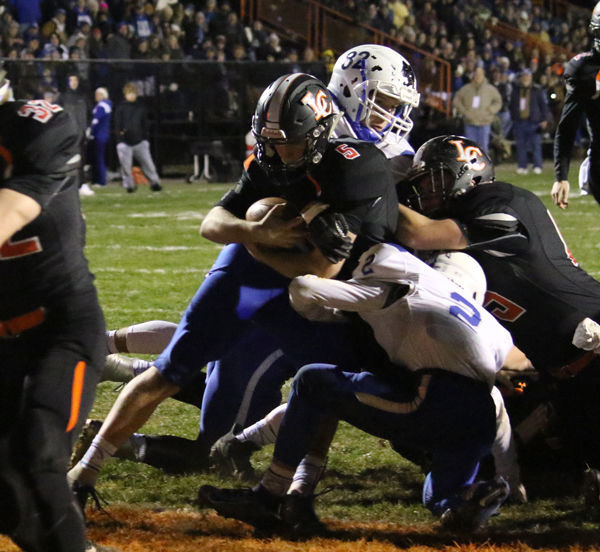 Liberty Center’s Karter Kern punches the ball into the end zone for one of his three first-half touchdowns during the Tigers’ 43-12 win over Allen East Friday in the Division VI playoffs at Rex Lingruen Stadium. 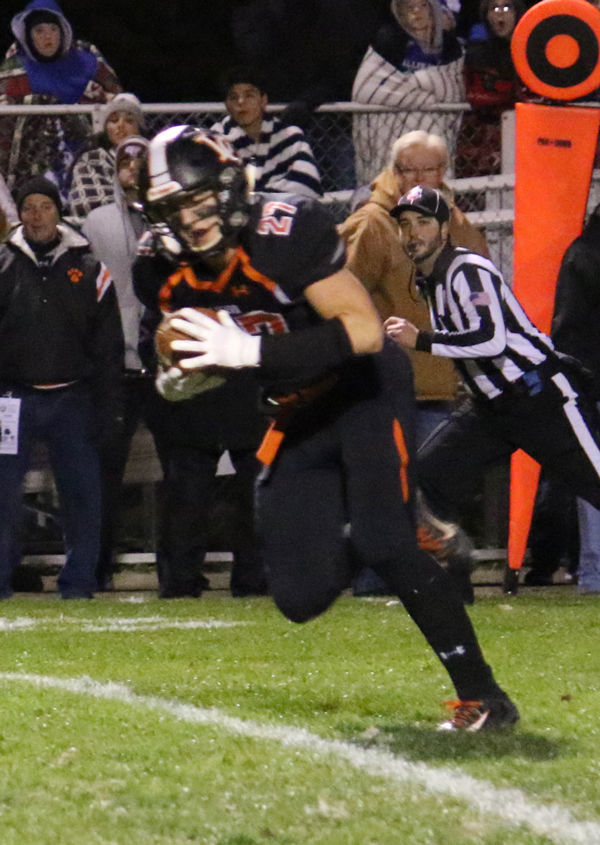 Liberty Center’s Alex Righi brings the ball upfield on one of his two fumble recoveries during the Tigers’ 43-12 win over Allen East Friday night in the first round of the Division VI playoffs at Rex Lingruen Stadium. 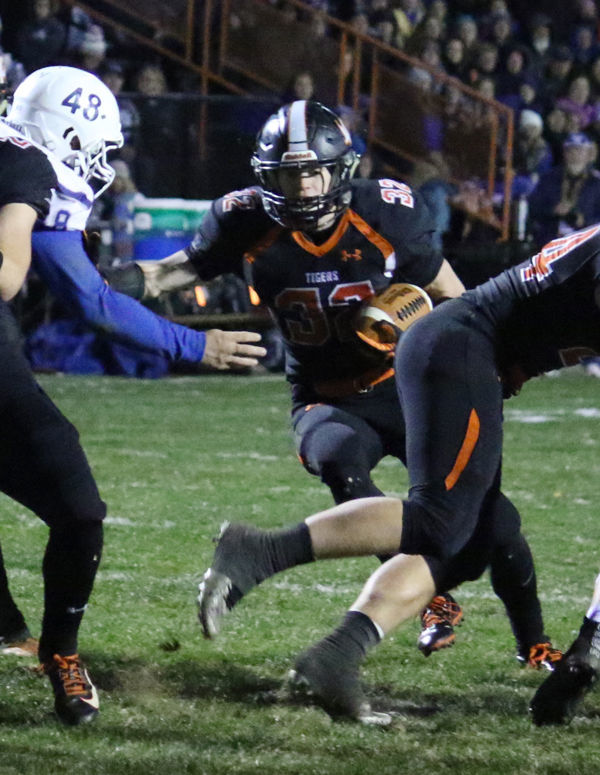 Liberty Center’s Zach Bowers looks for a hole during the Tigers’ 43-12 win over Allen East Friday night in the Division VI playoffs at Rex Lingruen Stadium.

Liberty Center’s Karter Kern punches the ball into the end zone for one of his three first-half touchdowns during the Tigers’ 43-12 win over Allen East Friday in the Division VI playoffs at Rex Lingruen Stadium.

Liberty Center’s Alex Righi brings the ball upfield on one of his two fumble recoveries during the Tigers’ 43-12 win over Allen East Friday night in the first round of the Division VI playoffs at Rex Lingruen Stadium.

Liberty Center’s Zach Bowers looks for a hole during the Tigers’ 43-12 win over Allen East Friday night in the Division VI playoffs at Rex Lingruen Stadium.

He loved most of what happened afterwards, however, as Liberty Center cruised to a 43-12 win in the opening round of the Division VI state playoffs Friday night at Rex Lingruen Stadium.

“It never makes you feel real good,” Mohler said of the Mustangs’ opening drive. “(Allen East) was pretty sharp to start that game. They converted some third downs on us, and sometimes when you get that, it’s like, “Can you do that for a full game or are we going to be able to stop them?”

AE quarterback Bryce Belcher finished with 191 yards passing and two scores, completing 20 of 34 attempts with two interceptions and a fumble lost. Belcher ran the ball eight times for 72 yards to lead the Mustangs on the ground.

Camden Krugh completed eight of 11 passes for 110 yards and one score for the Tigers, while Karter Kern ran the ball 11 times for 60 yards and three first-half touchdowns.

Zach Bowers gained 73 yards on 17 touches and one touchdown, with Max Phillips chipping in 31 yards on nine carries to pace the Liberty Center rushing attack.

After Belcher hit Logan McCluer for a five-yard touchdown on the opening drive for Allen East, the Tigers responded with Kern breaking off a 33-yard run off left tackle on fourth-and-one to put LC up 7-6.

The Mustangs tried to respond with a screen pass two plays later, but the ball landed behind Belcher on the throw, allowing Alex Righi to recover the fumble and set the Tigers up first-and-10 from the Allen East 18.

Krugh punched the ball in three plays later on a quarterback sneak to put LC up 14-6 with 2:26 remaining in the first quarter.

Righi recovered his second fumble of the game on the ensuing kick off after Allen East declined a free kick out of bounds penalty, forcing LC to re-kick.

Bradden Crumrine received the re-kick but had the ball punched out in a scrum as he tried to push for extra yards. Righi pounced on the ball and brought it back to the Mustangs’ 10 to set up first-and-goal.

“To be honest, I would just say I was in the right place in the right time,” Righi said of his fumble recoveries. “On the kickoff, I just had my hand in there and I knew I should rip it, and I was proud of my guys for flying to the ball the way we did.”

Kern capped the following drive with a two-yard scamper that put the Tigers up 21-6 with 50 seconds left in the opening stanza.

On the next Allen East possession, the Mustangs worked the ball to the Liberty Center 36 before Righi stepped in front of Belcher’s throw to give the Tigers the ball at their own 38.

“My line did a great job of giving their guy pressure,” Righi said. “He just threw it up and I happened to be there.”

After trading punts the next two possessions, Righi made an impact in the special teams game, nailing a punt snapped at the AE 42 down at the Mustangs’ 1-yard line. The Tigers upped the pressure and forced Allen East to a three-and-out on that drive.

“I think those are hidden yards,” Righi said of his play on special teams. “Our coaches like to stress on that a lot. Special teams plays a big part and if we get put in good spots on a drive, or put them in bad spots like we did on that punt, it can be demoralizing for the other team.”

Kern stretched the LC lead to 28-6 on the next drive, finding paydirt from three yards away with 1:56 remaining before the break.

“Alex is a kid where, if you look at the stats, you aren’t going to see his name a whole lot, but that kid’s a warrior,” Mohler said of Righi. “He is exactly what we want in this program, and he’s one of the pieces of glue to this team. Karter Kern came out and did what he has to do. We feel very confident with him.”

Bowers capped a 12-play, 65-yard drive to open the third quarter with a nine-yard touchdown run with 5:59 left in the frame, and LC hit on the two-point conversion try to stretch the lead to 36-6 and enact the running clock.

The Mustangs punted on the following drive, but a fumble gave the ball back to Allen East on its own 47-yard line, sparking a seven-play, 53-yard drive. The drive was capped by a 14-yard touchdown pass from Belcher to Cole Fletcher to cut the Tigers’ lead to 36-12 with 10:09 left in the game.

Liberty Center re-gained the running clock with 4:37 left in the game when Krugh lofted a ball to Trey Patterson for a 25-yard touchdown, putting LC up 43-12.

Dylan Matthews picked off Belcher inside the red zone on the next AE drive to seal the Tigers’ 10th win of the year.

“They’re fundamentally sound on defense and really fly to the ball,” Mohler said of Allen East. “It was tough-sledding for us to get anything. In high school football, if you can’t get big chunk plays, it’s hard to drive the field. We were fortunate to get the short field at times, which we needed.”

Liberty Center (10-1) advances to take on co-Northwest Ohio Athletic League champion Archbold Friday. The Streaks advanced with a 27-21 win over Coldwater Friday at Bluestreaks Stadium. Allen East’s season ends with a record of 9-2.

“The first game at home is big, and you kind of use that as motivation for your seniors that can get one more game on this field,” Mohler said. “I thought our seniors did a great job tonight.”

The woman bidding to make history at Daytona

Tag, you're it! Chidren's game gets revamp