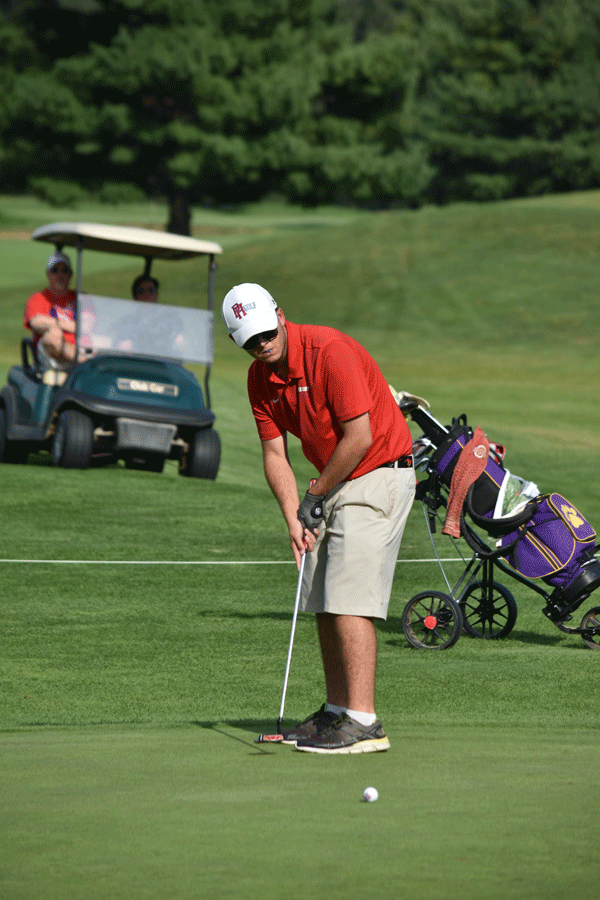 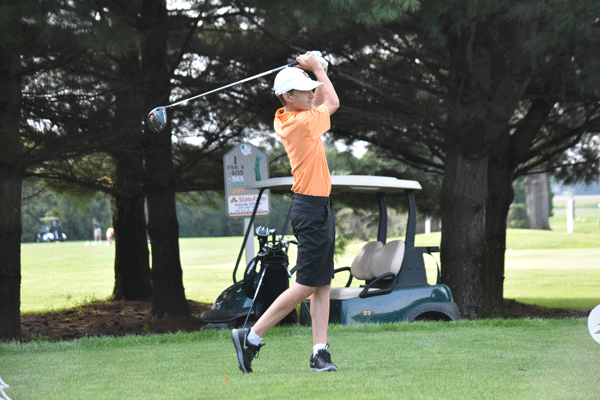 Liberty Center’s Sam Zeiter follows through on a tee-shot during the Tigers’ three-way meet with Patrick Henry and Bryan Tuesday at White Pines.

Liberty Center’s Sam Zeiter follows through on a tee-shot during the Tigers’ three-way meet with Patrick Henry and Bryan Tuesday at White Pines.

Trey Woods led the Patriots with a 39, while Nicholas Myers added a 52. Ethan Rohrs and Aidan Breece each shot 55 to round out the PH scoring.

Cole Zeiter turned in a 55 to lead the Tigers, who also got a 56 from Sam Zeiter and a 61 from Jake Spieth. Jacob Croninger rounded out the LC scoring with a 67.

SYLVANIA — Landon Willeman shot a 39 to finish two strokes off the lead, but Napoleon fell 156-182 Tuesday in Northern Lakes League action against Anthony Wayne at Brandywine.

Zac Schroeder added a 45 for the Cats, who also got a 47 from Riley Kleck and a 51 from Jayce Brubaker to round out the scoring.

Andrew Briars and Nick Huffman each shot a 37 for the Generals to lead all golfers on the afternoon.

DEFIANCE — Luke Rosebrook and Drew McCarty each shot a 40 to lead all golfers, Josh Nofziger added a a 41 and Archbold cruised to a 176-215 win over Holgate Tuesday at Auglaize.

Kenny Williams turned in a 55 to complete the Bluestreaks’ top four.

BRYAN — Hunter Burlew shot a 36 to lead Montpelier to a 163-171 win over Wauseon Tuesday at Suburban Golf Club.

Andy Scherer led the Indians with a 39, while Nic Barone and Dylan Grahn each added a 43. Luke Wheeler and Jaxon Radabaugh each shot a 46 to tie for Wauseon’s fourth score.

DEFIANCE — Claire Sinn and Marta Lopez each shot a 49 to lead all golfers, lifting Wayne Trace to a three-way win over Fairview and Tinora Tuesday at Eagle Rock.

Wayne Trace collected a team score of 200, while Fairview placed second with a 219. Tinora finished in third with a score of 280, while Patrick Henry did not get a team score due to missing a golfer with an injury.

Sydney Rohrs led the Lady Patriots with a 58, while Brandi Arnold shot a 63. Chloe Ballow rounded out the PH contingent with a 76.

Emma Luthi and Rylee Joost each shot 66 to lead the Lady Rams, while Savannah Welling and Zoe Gomez each shot 74 to complete the Tinora score.

Patrick Henry competes against Swanton and Archbold tomorrow at 4:30 p.m at Ironwood.

BRYAN — Lexe McQuillin shot a 41 to lead all golfers, lifting Wauseon to a three-way win over Montpelier and Defiance Tuesday at Suburban.

Calaway Gerken added a 48 for the Lady Indians, who also got a 60 from Jordan King and a 61 from Halle Frank.

Wauseon won with a team score of 210, while Montpelier was second with a 240. Defiance collected a score of 244 for third.

How to watch Saturday's live coverage of LSU's championship parade