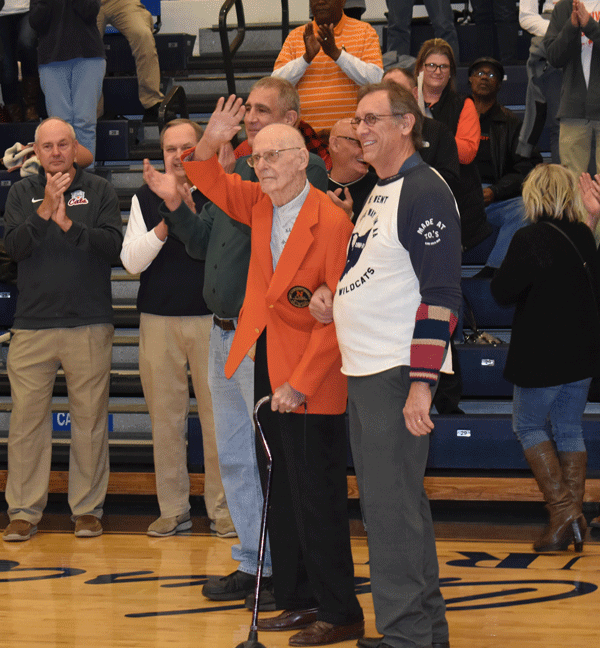 Former Napoleon coach Fred Church waves to the crowd with his son John Church at his side during the dedication of the Grand Canyon floor with his name on it before the Wildcats’ game with Southview Friday night. 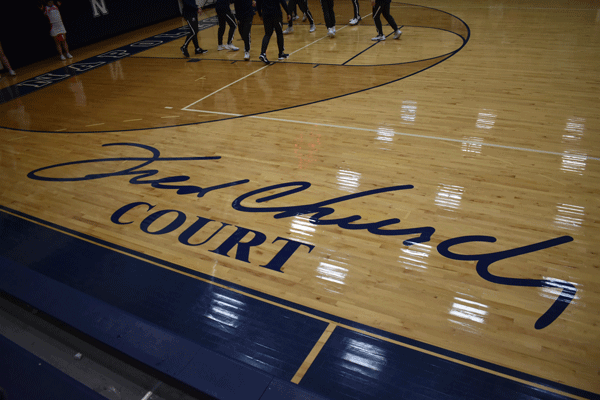 Napoleon’s boys basketball team warms up in the background on the newly-named Fred Church Court in the Grand Canyon Friday night. 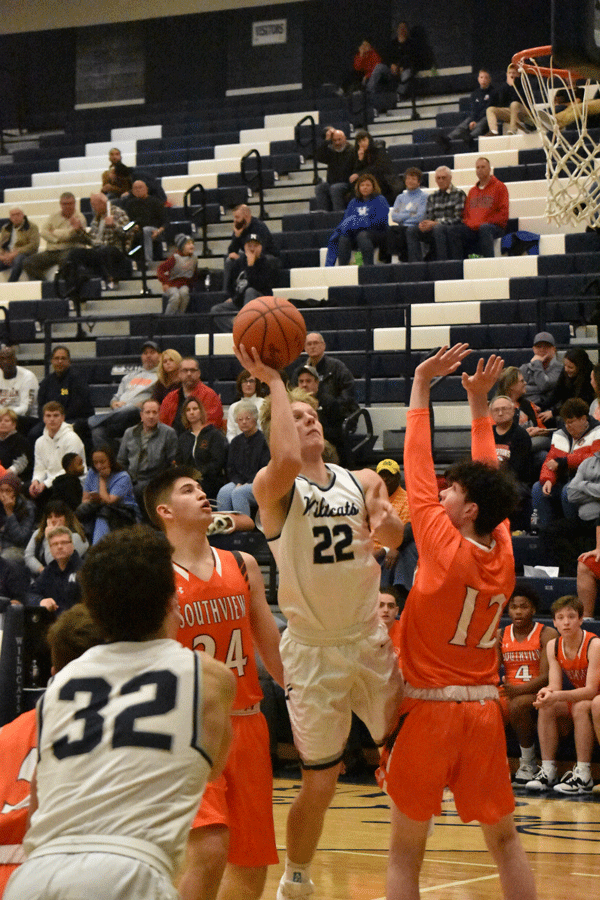 Napoleon’s Isaac Fraker takes a shot in the lane against Southview Friday night in the Grand Canyon.

Former Napoleon coach Fred Church waves to the crowd with his son John Church at his side during the dedication of the Grand Canyon floor with his name on it before the Wildcats’ game with Southview Friday night.

Napoleon’s boys basketball team warms up in the background on the newly-named Fred Church Court in the Grand Canyon Friday night.

Napoleon’s Isaac Fraker takes a shot in the lane against Southview Friday night in the Grand Canyon.

Forty years after christening Napoleon High School’s new gym — the Grand Canyon — with a pair of wins over Rossford and Wauseon, legendary boys basketball coach Fred Church returned to his old stomping grounds to have the floor named after him.

His teams made four regional appearances and won 20-plus games five times during his tenure.

Over his final three seasons, Chruch’s Wildcats were 75-3 with a perfect 28-0 record for the 1980-81 season. During that stretch, Napoleon won 59-straight regular season games, 32 consecutive league contests and 42 in a row in the Grand Canyon.

The floor was dedicated to Church, whose name is written in cursive on both sides of the court, Friday with a pre-game ceremony that included former players and coaches making a tunnel for the former coach to walk through.

Church was escorted by his three sons, John, Jim and Joe, and was greeted by dozens of former players who each shook his hand after the ceremony.

“I was honored to be a part of it,” said Bostelman, who played at Napoleon. “It was neat to see him and how the crowd reacted. It was a fun experience.”

The Wildcats, however, were unable to provide Church and the crowd with a victory. Invading Southview defeated the Wildcats 44-32 in the season and league opener for Napoleon.

The Wildcats led 6-2 after 3-pointers by Landon Willeman and Jarrett Gerdeman, but the Cougars reeled off 11-straight points and never trailed again.

Willeman sank two free throws and Jaden Brubaker made a steal and lay-up to cut Southview’s lead to 13-10 with 1:47 remaining in the first period.

Napoleon did not score for the next five minutes and the Cougars stretched their lead to 20-10 midway through the second period.

The Cats kept the game close with tough defensive play, and Zach Rosebrook sandwiched a bucket and a triple around a Southview basket to start the third quarter. Isaac Fraker scored inside to cut the lead to 27-22 and force Southview to call time-out with less than five minutes remaining in the third period.

Napoleon managed just a free throw the rest of the third quarter and did not make another field goal until a 3-pointer by Gerdeman with four minutes left in the game.

By that point Southview led 37-29 and was able to seal the win from the foul line.

“We were not able to get into any kind of rhythm on offense,” said Bostelman. “Not being able to get any rhythm meant we didn’t make the right reads and we started to not go toward the basket.

“We have to go inside more,” added Bostelman. “We had too many shots where the passes weren’t coming from the inside, just passing around the outside. We have to have more of an inside-outside game.”

“We learned we can defend good players,” added Bostelman. “I thought we did a nice job on their big guy and we were physical on defense. I thought we ran our sets well, we just didn’t execute and make enough good reads.”

Willeman paced the Cats with 9 points, while Gerdeman and Rosebrook each added 6.

Napoleon (0-1, 0-1 in the Northern Lakes League) is back in action tonight at Tinora. The start of the game has been moved up, with the junior varsity beginning at 5:30 p.m.

With ‘work to do’ to catch Super Bowl-bound 49ers, Brian Gutekunst and Packers aim to close gap, build on 2019 success

A look inside the stadium hosting Super Bowl LIV