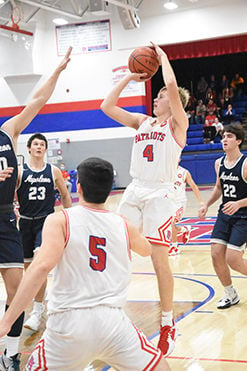 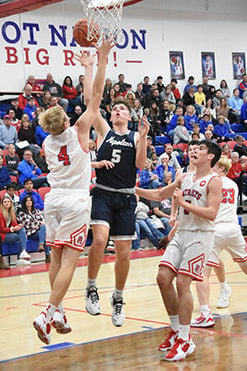 Napoleon’s Blake Wolf goes up for a shot against Patrick Henry Friday in the House of Heat.

Napoleon’s Blake Wolf goes up for a shot against Patrick Henry Friday in the House of Heat.

The Patriots certainly delivered the first punches and then held off a barrage of Wildcat haymakers before delivering the knock-out blow from the foul line in the fourth quarter.

Patrick Henry never trailed and fought off Napoleon for a 57-49 win in the House of Heat Friday night.

“To win, we had to keep them off the glass, get to their shooters and stop their transition offense,” added Hieber. “Those were our three keys and we executed all three.”

Patrick Henry won the battle of the boards, 34-25, with Will Seedorf grabbing 10 rebounds for the Patriots. They forced Napoleon into 20 of 60 shooting from the field, including 2 of 18 from 3-point range.

“Another key for us was when they caught the ball we had to be there,” said Hieber. “We couldn’t let them shoot uncontested from outside. To hold them to 2 of 18 from outside the arc, our kids did a phenomenal job.”

“We never found our rhythm,” said Napoleon coach Chad Bostelman. “Give the PH kids credit, they did a real nice job playing tight against us and getting to the ball. I thought we were a step slow all night.”

Tied at 2, Patrick Henry went on an 11-2 run, with Nash Meyer sinking two 3-pointers and Lincoln Creager burying another triple for a 13-4 lead with 2 1/2 minutes left in the first period.

“At practice we don’t just shoot stationary 3s,” said Hieber. “We run to a spot and shoot it. We wanted to be patient on offense, but we are going to take what the defense gives us. At times tonight they were giving us that open look.”

Napoleon closed the first quarter with a 6-0 run, including a triple by Blake Wolf to cap the run.

The teams went back and forth in the second period, with the Wildcats closing the gap to 21-19 on a 3-point play by Camden Kruse with 3:29 left until intermission.

Patrick Henry answered by closing the period on a 6-2 run, with Landon Johnson twice scoring on driving lay-ups, for a 27-21 lead at halftime.

The Wildcats came out of the half with consecutive buckets by Tanner Rubinstein, and after a pair of free throws by PH’s Gavin Jackson, Josh Mack threw down a thundering dunk to close the gap to 29-27 with just under five minutes left in the period.

“That was a big punch,” said Hieber. “To win this game we knew we had to take some punches and punch back. I am proud of our guys for the way they kept fighting. They did exactly what we asked them to do.”

After the dunk, Drew Rosengarten sank a triple for PH, and after a free throw by Seedorf, Aiden Behrman added another triple to push the Patriots’ lead to 36-27.

Six Patrick Henry players made 3-pointers in the game.

Rubinstein hit a 3-pointer and Kruse sank two free throws to pull the Cats to 36-32 entering the final period.

After a triple by Johnson, Kruse and Rubinstein scored to pull within 3 (39-36), but PH responded with a 10-0 run for the final KO.

Jackson and Creager each sank two foul shots before Creager buried a triple and followed with a 3-point play, as the PH freshman scored 8 points in a 1:25 span.

Johnson then sealed the win by sinking six-straight foul shots over the final minute. The Patriots finished the game 17 of 22 from the foul line.

Johnson led PH with 15 points, while Creager added 13 and Rosengarten tallied 9. Nash Meyer and Jackson each had 8 for PH, which was 16 of 31 from the field.

Napoleon was led by Rubinstein with 16 points and nine rebounds, while Mack added 14 points and Kruse tallied 11.

“This is disappointing for sure,” said Bostelman. “I thought we settled for being boxed out way too much. Our decision making wasn’t very good. We are going to have to look at the film and see what we need to do to get better.”