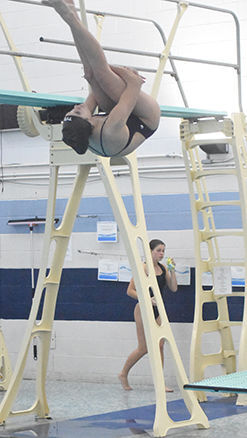 Napoleon’s Mara Cashman holds her dive during the NLL Diving Championships Thursday at the NHS Natatorium. Cashman placed runner-up at the meet. 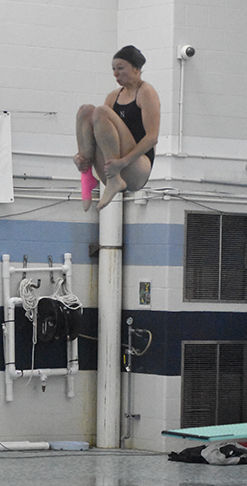 Napoleon’s Mara Cashman holds her dive during the NLL Diving Championships Thursday at the NHS Natatorium. Cashman placed runner-up at the meet.

“Emma continues to demonstrate growth, improving many of her more difficult dives while fine tuning her less difficult (voluntary) dives,” said Shepard. “Tauren Davis relied on her greatest strength: consistency. She handles the pressure of championship meets with ease.”

Foreign exchange student, Beatrice Tonelle finished in seventh place for the Lady Cats with a score of 252.05.

“Beatrice was competing in her first championship meet, as she arrived in Napoleon with no prior diving experience,” said Shepard. “She has excelled quickly in the sport, earning her place to compete at the NLL meet.”

Tinora’s Lauren Melia competed at the meet, but as an exhibition diver. She finished with a score of 435.20, which would have placed her third.

Napoleon did not have a male diver at the meet.

Only three divers competed in the boys’ meet.

'Man, I didn't want to let him down.' How Gary Pinkel instilled loyalty at Mizzou