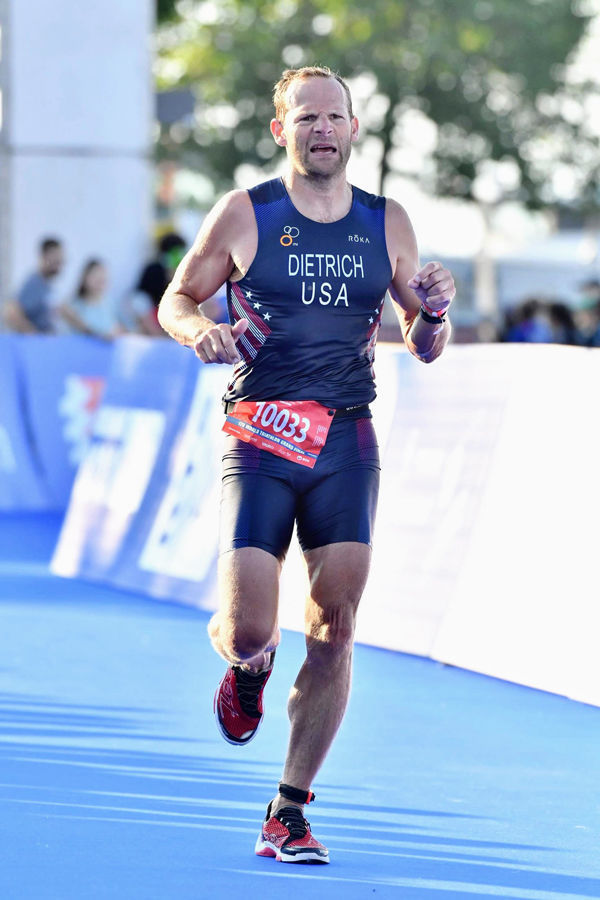 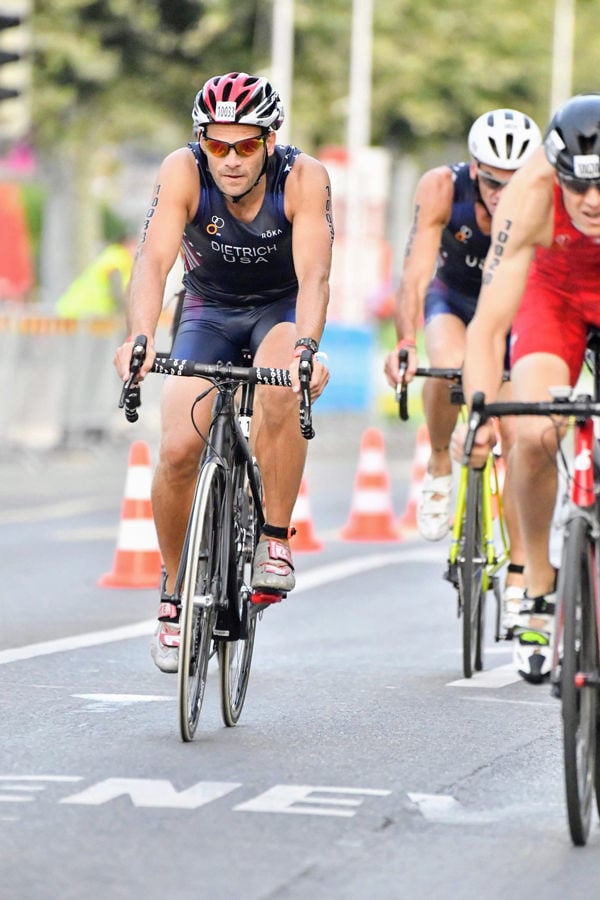 Napoleon’s Matt Dietrich used a hobby to turn a tragedy into a once-in-a-lifetime experience.

Dietrich, a principal at Napoleon Elementary School, recently competed for Team USA during the World Triathlon Championships in Switzerland.

Competing on the world stage was the culmination of a long journey for Dietrich, who has been doing triathlons (swimming, biking and running) for 12 years.

However, 10 years ago, Dietrich was in an accident where he was thrown from a school bus and broke five bones in his back and two in his leg.

“The doctor told me that training for triathlons, and being in shape, really helped with my recovery,” said Dietrich. “After recovery I started to train harder because I wanted to keep my weight down. If I put any weight on, I really felt it in my back.”

That extra training led to Dietrich becoming more competitive in area triathlons. He has won his age group at the Sylvania Triathlon six of the last seven years, placed first at Maumee Bay three of the past five years and has been the overall winner of the Napoleon Triathlon the past two summers.

That success led Dietrich to compete at the National Triathlon in Milwaukee two years ago and again in Cleveland in 2018. Last year he placed 11th in his age group at the national race, qualifying him for this year’s Team USA.

“I had been doing workouts for nationals and other races, but I had no idea what I was getting into,” said Dietrich. “Team USA sent me an electronic workout schedule that included weight lifting and yoga. With my work schedule I had to run at 5 a.m. before school started and was riding my bike to Defiance and back at 9 p.m. I had to put lights on my bike.

“It was a lot of work,” added Dietrich. “I was glad when race week got here.”

That happiness lasted until the race began.

“I have been competitive my whole life,” said Dietrich. “I was an all-state football player and wrestled at the state meet in high school. I have been in some intense environments, but this was just crazy intense. This was a whole other level of competitiveness.”

Starting with the swimming portion of the race, the competitors swam in Lake Geneva.

“There were 150 of us and we all swam at about the same speed,” said Dietrich. “It was like a cartoon with the fox and the hounds. There was like a cloud of legs and arms.

“The setting itself was beautiful,” he added. “You could see the bottom of the lake — 40 feet down.”

After the swimming portion was cycling. Dietrich, who had to rent a bike when he arrived in Switzerland, said there was no way to prepare for the style of course they competed.

“Most of the biking was up hills,” said Dietrich. “There are no hills in northwest Ohio. At one point I was riding on a 25 percent gradient and going maybe six or seven miles per hour. I was just crawling. Then we went downhill and I was gong 42 miles per hour.”

Finally, the running portion took the competitors around the Olympic Museum, which was more uphill climbing.

“We started running around the lake, but at some point there was no longer a path, it was a staircase,” said Dietrich. “A steep one. It was the toughest 5K race I have ever run.”

Despite the trial of the event, Dietrich finished in a time of 1 hour 11 minutes and 27 seconds. He was 45th in is age group and the seventh best American.

Dietrich and his wife, Karen, spent four days in Switzerland and then went to Italy for a week.

“It was exciting, but I don’t think I will ever do it again,” said Dietrich. “If the world event was to go to Germany or France, I would think about getting in shape and doing it again.”

Sports stars react to US protests over George Floyd's death

Stephen Jackson on what is justice: 'We never had it, so I can't answer it'

Report: NFL says camps can only be held at team facilities