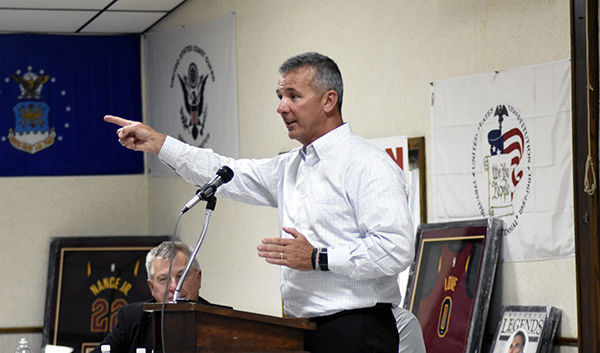 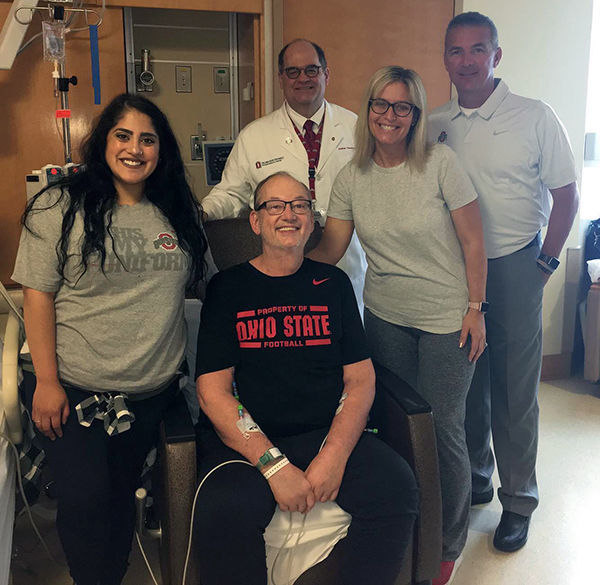 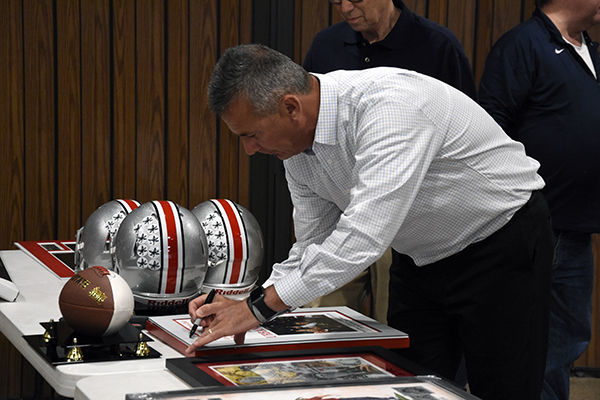 Meyer, recently retired after leading the Buckeyes to a 13-win season and a Rose Bowl championship over Washington, was the speaker at the event.

“I have such a respect for this part of the state,” Meyer said to the crowd. “Not many of you know this, but I was born in Toledo. This area is a part of me. Having the opportunity to coach at Bowling Green State gave me such an appreciation for the people in this area, especially being so close to enemy territory.”

From there, Meyer won two national championships at Florida before taking a break from coaching until 2012, when he was hired in Columbus.

Meyer talked about what sets Ohio apart in a football sense from his previous stops.

“Well the importance of high school football and college football here is really outstanding,” Meyer said. “The reason I took the job (at OSU) was because I took a look on the map of where it was and I had just great admiration for this part of the country. Football here is very, very important. I remember my town would shut down on Friday nights, and that’s the foundation for what we are and what we do.”

With the Buckeyes, Meyer won 83 games, including a win in the inaugural College Football Playoff national championship game over Oregon in 2014. Meyer also went 7-0 against Michigan in what he called one of sports’ greatest rivalries.

“I’d say that my most memorable win was against the team up north this season,” Meyer said. “I remember looking up at the scoreboard after that game and saw 62 points, and that was a pretty unbelievable feeling.”

Meyer spoke to the sold-out crowd in attendance about what it takes to achieve and maintain greatness, both personally and as part of a team.

“Each person needs to think about what they need to do to be ‘the one’ in whatever they do,” Meyer said. “On the sidelines, I always have one or two coaches I go to whenever we needed a fourth-and one-conversion. That person never has to worry about salary or job titles, because they showed me they’re someone I can trust. That’s so important.”

On Tuesday, Meyer met with Dr. George Cochran, a dentist and resident of Napoleon who had recently received a heart transplant at the Ricahrd Ross Heart Hospital in Columbus.

“I get a lot of requests, and my secretary came to me and said that I was going to want to read this one,” Meyer said. “She said I wasn’t going to regret it, and when I saw he was from here, we agreed to go over to the hospital. When I walked into the room, I had no idea what to expect, and this guy is incredible.”

Dr. Cochran’s son in law, Hector Cruz, said he emailed Meyer to try and arrange a surprise meeting in the hospital.

“We were trying to maybe get some signed memorabilia from players and what not, and we knew they were getting busy so we didn’t know if that was going to happen,” Cruz said. “I just kind of took a shot in the dark and emailed him, and his assistant emailed me the next day to set up the meeting. We told the nurses and really everyone but him, because we wanted it to be a surprise.”

Cruz said Meyer met with the family in the room for about 20 minutes, taking the time to learn about the family and their story.

“He’s an Ohio State grad, a grad of Ohio State Dentistry, so definitely a Buckeye,” Meyer said. “I’m sitting there talking to his wife, and they have 12 children, 10 of which were adopted from seven different countries, and it was because they just wanted to give those kids a good life. And here they are thanking me for being there, and I just felt awkward about that. It’s an incredible story.”

Dr. Cochran, who received the transplant April 28, was released from the hospital shortly after his meeting with Meyer Tuesday. There will be a benefit to help the family with medical expenses Saturday May 18 from 9 a.m. to 1 p.m. at the Crossroads Church of Napoleon. There will be a bake sale and raffle auction to raise money, with all proceeds aiding in treatments and living expenses not covered by insurance.

Meyer talked before departing about the future of Ohio State football now that he is retired.

“I kind of knew last year that (Ryan Day) is elite,” Meyer said of the Buckeyes’ new coach. “He believes in our culture, and our infrastructure is so strong at Ohio State from everything from recruiting to player development. I’m very biased but it’s the best in America, and I just think that once you get the infrastructure set, you just need someone who won’t disrupt any of that, and Ryan is the guy for that job.”

With Za’Darius Smith shut down, Packers look to Preston Smith, Rashan Gary to step up

7 Saints assistants unavailable vs. Panthers due to COVID-19 protocol