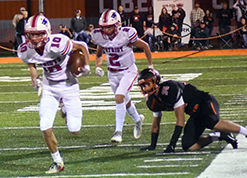 Patrick Henry’s Brock Behrman takes off for the end zone after making a catch in the first quarter against Liberty Center Friday night at Rex Lingruen Stadium. 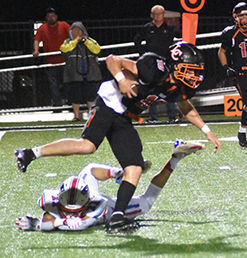 Patrick Henry’s Brock Behrman takes off for the end zone after making a catch in the first quarter against Liberty Center Friday night at Rex Lingruen Stadium.

LIBERTY CENTER — In the battle between ground and air, it was Liberty Center’s rushing attack scoring a 28-18 victory over Patrick Henry’s passing prowess Friday night at Rex Lingruen Stadium.

The Tigers rushed for 313 yards, led by Matthew Orr, who had 125 yards on 19 carries and two touchdowns. Quarterback Zane Zeiter carried the ball 14 times for 115 yards.

“It was not easy,” said Liberty Center football coach Casey Mohler. “We had to scratch and claw our way there. We tried to control the line of scrimmage and once we started moving the ball on the ground, we just stuck with it.

“Our line got off the ball,” added Mohler. “Our running backs also did a great job blocking for each other. That is something that gets overlooked. They take pride in that.”

The game was back and forth right from the start, with both teams scoring on their first possessions.

The Patriots started it off with a 56-yard scoring pass from Nash Meyer to Brock Behrman, who broke three tackles before racing the final 40 yards to the end zone.

The Tigers answered, scoring on their third play from scrimmage — a 38-yard run by Orr. Wes Wymer kicked the PAT for a 7-6 LC lead with the game less than two minutes old.

Landon Amstutz came in at quarterback for Liberty on its next possession and hit Riley Chapa for a 43-yard reception to the PH 21. Orr capped the drive with a 6-yard TD run and a 14-6 lead early in the second quarter.

The Tigers drove inside the PH 10 late in the first half, but a fumbled hand-off was recovered by the Patriots’ Landen Wensink to keep the score 14-6 at half.

Liberty Center scored on the opening drive of the second half, with Zeiter hitting Chapa for an 8-yard TD pass into the corner of the end zone.

Patrick Henry responded with a 31-yard TD pass from Meyer to Landon Johnson to close the gap to 21-12 with 4:43 left in the third quarter.

An interception by Behrman early in the fourth quarter put the Patriots in position to get back into the game, but Owen Long stepped in front of a pass and raced down the sideline for a 60-yard pick-six.

“The sad part of that was the receivers ran the wrong route,” said Patrick Henry coach Bill Inselmann. “That interception was not on my quarterback.”

It did, however, take the air out Patrick Henry’s comeback attempt.

“That was definitely the icing on the cake,” said Mohler. “That was a gigantic play by Owen Long. Owen is a senior and he has been making big plays for us all season.”

Patrick Henry scored on a 24-yard pass from Meyer to Johnson with 3:37 remaining. However, as was the case all game, the Patriots failed to make the 2-point conversion.

Liberty Center was able to run out the clock on the Northwest Ohio Athletic League win.

Meyer finished the game 26 of 39 passing for 328 yards, with three TDs and one interception. Johnson led the Patriots’ receiving with 11 catches for 148 yards and two TDs.

“We just could never get caught up,” said Inselmann. “We started the game with a score, and what did they do? They scored. It would have been nice if we could have held them and had the lead for a little while.

“That’s the best offense we have seen this year,” added Inselmann. “I liked some of the things we did on offense, but we have to pass block much better.”

“Any time you beat Patrick Henry and Coach Inselmann it’s a big deal because you know you have accomplished something,” said Mohler. “That is one of the premier programs in all of northwest Ohio. They make you work your tail off for a win, like we had to do tonight.”

No Davante Adams, no problem? Defying logic, Adams-less Packers are 6-0 under Matt LaFleur

Jim Polzin: Why it's hard to get a read on how good the Packers are seven weeks into the season