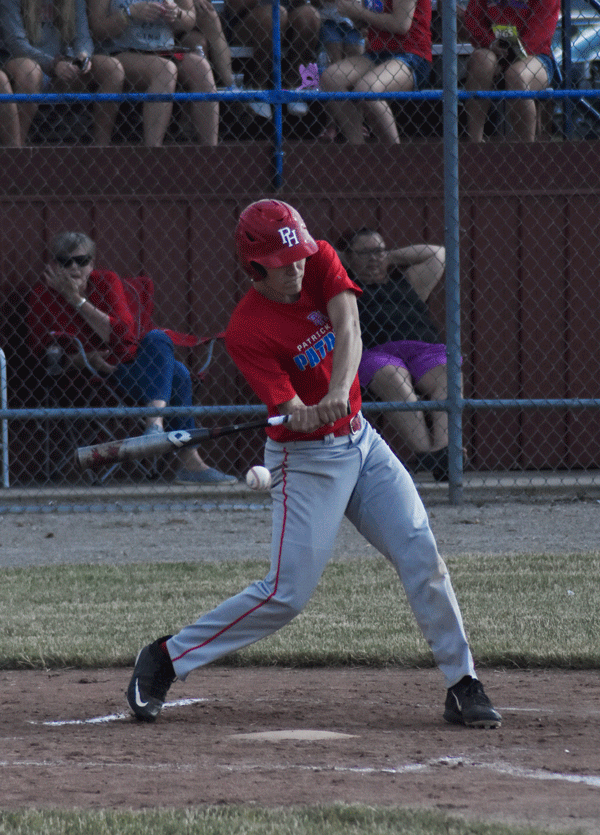 Patrick Henry’s Kolton Holloway takes a pitch to the opposite field during the Patriots’ 5-3 loss to Liberty Center Thursday at Garrold Parratt Field. 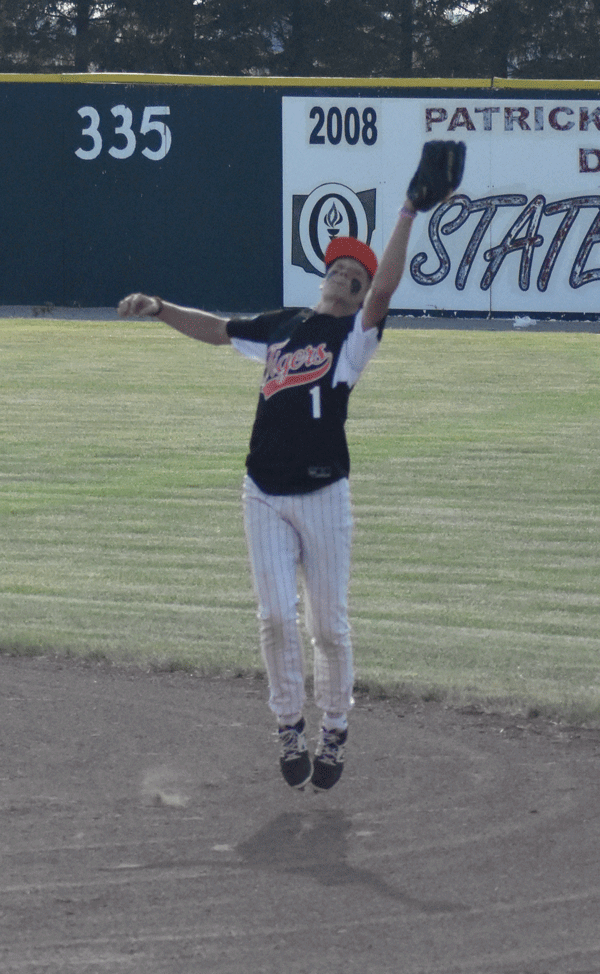 Liberty Center’s Aaron Schafer leaps to steal a base hit during the Tigers’ 5-3 win over Patrick Henry Thursday at Garrold Parratt Field.

Patrick Henry’s Kolton Holloway takes a pitch to the opposite field during the Patriots’ 5-3 loss to Liberty Center Thursday at Garrold Parratt Field.

Liberty Center’s Aaron Schafer leaps to steal a base hit during the Tigers’ 5-3 win over Patrick Henry Thursday at Garrold Parratt Field.

HAMLER — Both Liberty Center and Patrick Henry struggled mightily to find consistency on the mound in their summer openers.

The Tigers gave up seven runs in back-to-back scrimmages last week at Swanton, while the Patriots yielded seven runs on six free passes to Holgate Tuesday.

By the time the two rivals met at Garrold Parratt Field Thursday, the pitching felt much more like a normal game, save for a rough four-run third inning that led Liberty Center to a 5-3 win in eight innings.

The teams played one extra frame after the conclusion of seven innings.

“It’s always fun when you can play any Henry County team,” Liberty Center assistant coach Bob Murdock said. Murdock was coaching for LC head coach Ryan Zeiter, who was out of town with family obligations. “You know everybody and it’s always a fun environment. You could hear the kids, they were out there having a blast. We just ended up playing that extra frame, because why not?”

The game was scoreless until the Tigers loaded the bases with nobody out to open the top of the third. LC got one run in on a walk before Jacob Pogan drove in a second runner with a fielder’s choice when the PH throw to the plate from second pulled the catcher off the plate.

Trent Murdock drew a bases loaded walk and a fourth run was scored on a wild pitch to put LC up 4-0.

Evan Conrad came in to pitch for LC in the bottom of the third, tossing two scoreless frames, including the only 1-2-3 inning in the game. Conrad earned the win, striking out two and walking none while inducing a rare 3-4 put-out at first to start his outing.

“Evan wasn’t even going to come out for baseball in the spring,” Murdock said. “We were on him, and he wasn’t sure. Then when we got him to play, we wanted him to pitch but he still wasn’t sure. Then he comes out today and probably had our best innings, him and Max (Weaver) there at the end of the game. It’s funny how that works sometimes, but he played really well.”

Patrick Henry got one run back in the bottom of the fifth against LC pitcher Carter Burdue, getting runners on second and third with one out before plating one runner on a wild pitch. Burdue recorded a strikeout looking to end the threat and keep the Tigers’ lead at 4-1.

The Tigers responded in the top of the sixth, loading the bases with one out before scratching across Murdock for a run to push the lead back to 5-1.

The Patriots put together a rally in the bottom of the sixth, with Trey Woods reaching on a walk and taking second on a passed ball. PH coach Ray Greene put on the sign for a hit-and-run, and Woods advanced to third on a Clayton Feehan ground ball to the third baseman before rounding and scoring on the throw.

Mason Schwiebert added one more for the Patriots with an RBI single that pulled PH within 5-3, but Weaver tossed two scoreless to close out the game for the Tigers.

“This was a much different type of team than the other night,” Greene said. “They were aggressive and threw a lot of strikes. That’s one of the things we stressed to the guys after the game. You have to be aggressive in the zone when guys are throwing strikes. We have to make things happen ourselves, we can’t wait for a walk or a mistake to get it started for us.”

A bright spot for the Patriots was the appearance of graduated senior Kolton Holloway, who recorded two at-bats, including a bang-bang play at first he was called out on. Holloway, a four-sport star during his time at PH, has been recovering from an ACL tear suffered during basketball season and told Greene he was ready to play before Thursday’s contest.

“He actually reached out to me after the game on Tuesday and said he was feeling good and ready to play,” Greene said. “That was really cool. Kolton has been such a great athlete for what seems like every team here at PH, and I know he’s a big part of our program. I was glad to get to see him come out, since he and our other senior (Hunter Diem) both missed their springs because of the pandemic and injuries.”

Liberty Center also had contributions from an unlikely senior in the contest, as Aaron Schafer made one leaping catch at second base and another in left field for the Tigers.

“That’s part of what makes that so much fun,” Murdock said. “Aaron asked us before the season started if he could play baseball, and I asked him the last time he played and he told me coach-pitch. But Aaron’s a guy that, pound-for-pound, is one of the best athletes I’ve ever been around. He can do so many things, and he showed that by making a couple of really nice, athletic plays.”

Murdock said while the teams are focused on improving, it’s also about giving the athletes a chance to play some sort of season after the lost spring.

“You could hear the kids out there, they were having a blast,” Murdock said. “I told them the last four innings, just pick the four that are sitting out and go play where you want. It gets them he chance to play positions they want or to get into new situations.”

Youth baseball is up and running in Georgia

Trump asks Bubba Wallace to apologize. This was his response