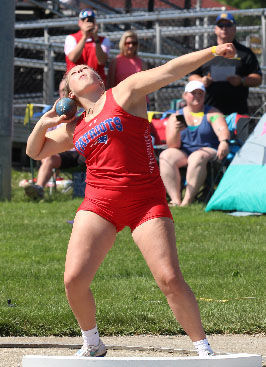 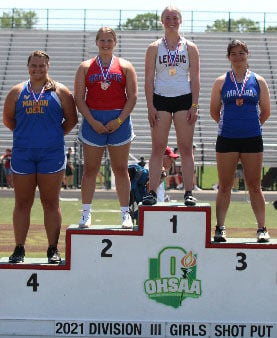 Patrick Henry’s Trista Fintel stands on the podium with her medal after finishing second in the shot put at the Division III state track and field meet Saturday at Westerville North High School.

Patrick Henry’s Trista Fintel stands on the podium with her medal after finishing second in the shot put at the Division III state track and field meet Saturday at Westerville North High School.

WESTERVILLE — Patrick Henry senior standout Trista Fintel capped off her career with a second-place finish in the shot put with a 40-9.5 at the OHSAA Division III state track and field meet at Westerville North High School.

But she was well below her personal record Saturday and finished just three inches behind state champion Ella Rigel of Leipsic.

“I was happy that I made podium, but it was a pretty bad day actually,” Fintel said. “Six feet under my PR, so was not happy with that at all.”

Fintel consistently threw 39-40 feet throughout the event, but couldn’t find the big throw to put her ahead of the field. She started with a 39-8, fouled her next attempt and tossed a 39-6 to enter the final three throws in second place.

“I just wasn’t hitting it right at all,” Fintel said.

Rigel’s top mark of 41-0.5 came in her third throw of prelims after fouling her first two attempts.

The Vikings’ senior had a 38-11.75 in her first finals throw and fouled her last two attempts.

Fintel added to her third-place finish in the discus (131-9) on Friday and capped off her high school career with three all-Ohio performances. She was third in the shot put (42-2) in 2019.

Although she came up just short of a state title, Fintel certainly made her mark among the area’s best.

She swept the throws in the Northwest Ohio Athletic League Championships in mid-May, including a meet-record 43-2 in the shot put.

A week later, she set meet records in winning the shot put (46-7.5) and discus (142-7) at the Division III district meet at Ayersville High School.

At the Division III regional meet at Tiffin’s Frost-Kalnow Stadium, she finished first in the shot put (44-5.75) and second in the discus (122-6).

Fintel, who will continue her throwing career at the University of Findlay, said she is looking to make her mark with the Oilers as well.

“I’m very excited to go to U of F,” Fintel said. “I’m going to hopefully break records there.

Ayersville sophomore Tyson Schlachter did not record a mark in three attempts in the boys discus.

Matter: Too soon to scrap preseason projections for Mizzou

Sean Payton: 'No way' Saints will be without all their coaches again vs. New England